Australia's new daily cases of Covid-19 have topped 1,000 for the first time since the pandemic began, as two major hospitals in Sydney set up emergency outdoor tents to help deal with an increase in patients.

Sydney, the country's largest city and the epicentre of the current outbreak, is struggling to stamp out a surge in the fast-spreading Delta variant, with daily infections hitting record levels even after two months under lockdown.

The rapid rise in Covid-19 patients has forced Sydney's Westmead and Blacktown hospitals, which service the city's sprawling western suburbs, to erect tents to screen and swab patients to help manage capacity.

The makeshift unit in the emergency department for Covid-19 patients will help "to offload delays", a Western Sydney Local Health District spokesperson said. 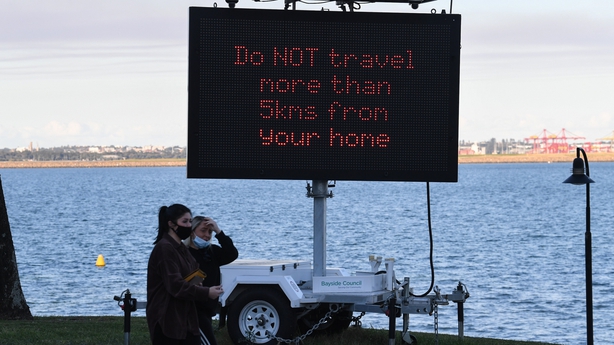 Although the system is "under pressure", it can withstand the current crisis once vaccination rates rise, she said.

"It might be different to the help you got before because of the situation, but please know the system is kicking in," Ms Berejiklian said at a televised media conference.

Of 116 people in intensive care in NSW, 102 are not vaccinated. Three new deaths were reported, taking deaths from the latest outbreak to 79, although the death rate has slowed since last year.

In a video posted on Twitter last night, the Australian Paramedic Association said paramedics were given a choice to wait in their vehicles with infected people or "wait outside in the freezing rain" due to the rise in patients.

The Delta variant has taken the gloss off Australia's early success against the virus that kept its coronavirus numbers relatively low, with around 47,700 cases and 989 deaths.

About 32% of people aged over 16 have been fully vaccinated, while just over 54% have had at least one dose.

Besides Sydney, the country's second-largest city, Melbourne, and capital, Canberra, are also in hard lockdowns, putting more than half of the country's 25 million population under strict stay-at-home orders.

Cases in Victoria, home to Melbourne, rose to 80, up from 45 a day earlier.

The federal government is pushing ahead with the country's reopening plans once vaccination rates reach 70%-80%, but some states have hinted they may delay given the rapid growth of cases in Sydney.

Ms Berejiklian said NSW may reach 70% fully vaccinated by mid-October, and airline Qantas said it was preparing for international travel to resume in December. A Delta case emerged in Auckland last week, ending a six-month run without local transmission in New Zealand, one of the world's last Covid-free zones.

That infection has since ballooned into the largest cluster the country has recorded throughout the entire pandemic, with 277 cases.

Ms Ardern said she believed even the Delta strain could again be stamped out in the community and health experts were advising her to stick with the elimination approach.

"In their view, it's not only possible, it remains the best strategy and I totally agree," she said after announcing 68 new community cases.

Her Australian counterpart Scott Morrison this week said it was "just absurd" to try to eliminate Delta, adding: "New Zealand can't do that."

Australia pursued a Covid-zero policy for about 18 months, but runaway Delta outbreaks mean some authorities there are now talking more about containment than elimination.

No one wants to use lockdowns forever

The New Zealand Herald this week asked if Ms Ardern was "chasing rainbows" trying to quash Delta and even her Covid-19 Response Minister Chris Hipkins conceded it raised "big questions" about the policy's effectiveness.

Ms Ardern said she was "not fussed" by such concerns, pointing to the success of a pandemic response in New Zealand which has resulted in just 26 deaths among a population of five million.

"And we wanted to save jobs and the economy, with the economy running at pre-Covid levels, we've done that too."

Ms Ardern said Delta had forced tweaks to the elimination strategy - such as a faster national lockdown and more extensive testing - but it was still a valid goal.

She said New Zealand could examine alternative policies when it improved vaccination rates, which are currently among the lowest in the developed world, with about 20% of the population fully inoculated.

"No one wants to use lockdowns forever and that is not our intention... but for now, while we vaccinate, elimination is the goal and we can do it," she said.