French President Emmanuel Macron's one-day visit to Dublin - his first official trip to Ireland - wraps up this evening after a packed schedule.

The key event was a press conference at Government Buildings, which followed a working lunch with Taoiseach Micheál Martin.

The two issues which got the greatest attention were the unfolding crises in Afghanistan, and corporate tax.

Of 130 members, Ireland is one of only nine hold-outs and it represents a high stakes issue.

Multinationals employ almost a third of Ireland's workforce and generate an even larger proportion of the total income tax take.

Before Mr Macron left France, an Elysée official said his administration believes that Ireland has "not completely closed the door" on signing up to the deal, and that this would be "the focus" of talks in Dublin. 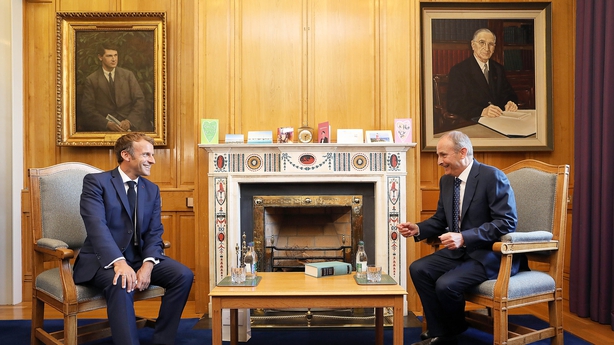 But the French President soft-pedalled it at the press conference, insisting he would not "pressure a friend".

He accepted that Ireland's low corporation tax had contributed to a "remarkable" economic performance in recent decades.

But he emphasised that as the EU evolves in a post-Covid world, changes will have to be made.

The issue was also raised when Minister for Finance Paschal Donohoe, who is also president of the Eurogroup, met his French counterpart Bruno Le Maire.

Mr Macron said that the situation in Afghanistan had deteriorated "more rapidly and become more brutal" than anyone had expected.

Events were "no more under control", he warned.

He vowed to work with the US to assist those on the ground. 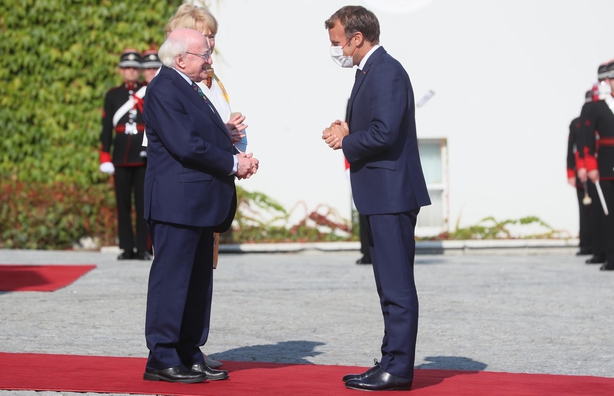 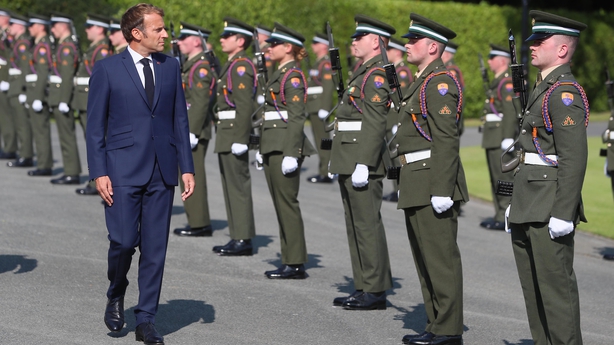 President Macron revealed that France had 20 buses either on their way to Kabul airport, or already there.

On board were people - including French, Afghans, and others - fleeing for their lives.

"We cannot protect all the Afghan people we wanted to protect," Mr Macron conceded.

But he insisted that France would continue to do its best.

He also promised not to recognise the Taliban regime, but said French officials would talk to it to secure safe passage for those trying to leave the country.

The French ambassador will be stationed in Paris, not Kabul, he said.

Mr Martin said Ireland will be "generous" when it comes to Afghan refugees, and will respond in "the correct humanitarian way".

In response to a question about the murder of French documentary producer Sophie Toscan du Plantier in Schull, Co Cork in 1996, President Macron said his thoughts go to Ms du Plantier's family, as it is "a tragedy" and "so much suffering remains".

Ian Bailey was found guilty in France of her murder, he said.

If Mr Bailey agreed to come to France then a new trial could be organised, he said, but as he has not, an arrest warrant has been issued.

The French court is considering what to do next, as the High Court in Ireland is not acting on the warrant.

All actions should be based on "mutual trust in our courts", which is at the heart of the European project, Mr Macron said.

Earlier, President Michael D Higgins welcomed the French President at Áras an Uachtaráin, where an official reception is being held this evening.

Mr Macron told President Higgins that Ireland holds "a precious place at the heart of the European dream".

Writing in the guest book of Áras an Uachtaráin, he said the invitation was a great honour and a source of inspiration.

He reiterated that France is Ireland's closest neighbour within the European Union and will remain a faithful friend for the future.

President Higgins discussed a number of topics with Mr Macron, including the future of the EU post-Brexit, Africa, the climate crisis and the crisis facing the global Covid-19 vaccination programme, according to a statement from the Áras.

"President Higgins stressed his support for a social Europe, and the need to develop new connections between economics, ethics and ecology," the statement said.

It added that President Higgins thanked Mr Macron for his "continuing support for Ireland, our shared ideals in the EU and France's assistance in relation to our citizens in Afghanistan."

The French President also met the two canine residents of the Áras, Bród and Misneach ("Pride" and "Courage", in Irish).

Mr Macron reassured his "Irish friends" that, as the Brexit process continues, Europe stands in solidarity with Ireland.

"We will never let you down", he vowed.

Mr Macron's visit fulfils part of his election pledge to visit all 27 EU member states. After today, he has only three left.

When he departed Government Buildings mid-afternoon, Mr Macron headed for Trinity College where he visited the Long Room Library and chatted to students, before heading to the Guinness Enterprise Centre.