An Irish expert on Afghanistan has accused its government of failing to mount a resistance and allowing the insurgents to take power.

Professor Michael Semple from Queen's University Belfast and the Mitchell Institute for global peace and justice said: "In the end they sat back and let the Taliban forces takeover."

Speaking on RTÉ's This Week, Professor Semple claimed that civilians do not want a Taliban takeover, but those who were in a position to try and fight back did not have the resources to do so.

"I have listened to accounts from the would-be resistance leaders who put it simply that resistance requires resources.

"There's a very limited amount that you could do if you are, as in the Afghan tradition, depending on people to sell their jewellery to finance the bullets and guns that are required to resist."

The former advisor to the UN and the EU added: "They looked to the government to deliver those resources to mobilise resistance forces after the army started to collapse and basically the government didn't deliver."

Prof Semple said the Afghan people do not want to live under Taliban rule.

"I've done a lot of probing, listened to a lot of Afghans," he said. "The vast majority seem to either dread or resent the prospect of a Taliban takeover, but in the end, nobody felt they could stand against them.

"I think that primarily this was a disastrous failure of leadership on the other side."

The insurgents are too strong and cannot be stopped at this stage, Professor Semple said.

"The Taliban were already well organised, they've built up a unified command in their movement over the years and for a long time I must say I have noted and warned that the Taliban didn't need to build up an army superior to the one that they faced. 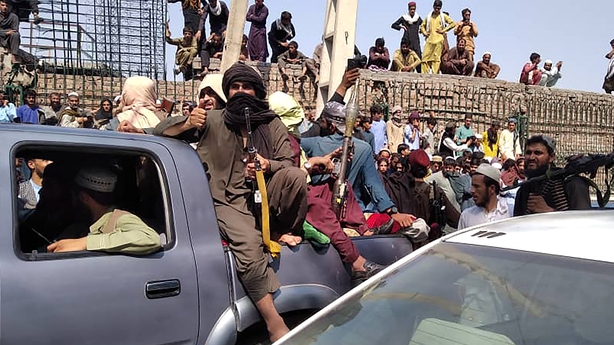 "They were always counting on triggering defection and surrenders and that's what they pulled off in spectacular style.

"They managed to undermine the willingness of the other side to stand against them."

Prof Semple added that the crisis has been evolving at pace and "nobody has been able to keep up with them.

"Today the Taliban are taking over control of Kabul - the capital - and through that they are asserting their authority throughout the length and breadth of Afghanistan.

"I don't think that we can call this a peaceful takeover in that they have used force of arms at every stage along the way, it's just that resistance collapsed.

"Right until the last minute there have been acts of violence and fighting, but this is not a pitched battle to take over the city, the resistance collapsed.

"Nobody has basically been standing up against the Taliban yet," he said.

Irish citizens told to leave Afghanistan as soon as possible

Meanwhile, Irish citizens in Afghanistan are being advised "to leave as soon as possible by commercial means due to the worsening security situation".

The Department of Foreign Affairs said it is "gravely concerned at the speed and scale of the Taliban's offensive" and the impact of the current violence on the Afghan people.

A "small number" of Irish citizens in Afghanistan are registered with the Embassy of Ireland in Abu Dhabi, which provides consular assistance to the country.

The department has also warned that it may not be able to help in an evacuation, and that it is limited in the assistance it can provide in a crisis.

Ireland has no diplomatic staff on the ground in Kabul.

In a statement to RTÉ's This Week, the Department of Foreign Affairs said that "as a member of the UN Security Council since January, Ireland has consistently called on the Taliban to end its campaign of violence, and to commit to a permanent ceasefire to prevent further suffering to civilians.

"Ireland has also joined with the international community in urging the Taliban to re-engage in the Doha peace negotiations. A negotiated political settlement between the Taliban and the Afghan government is the only way to secure a lasting peace in Afghanistan."

The statement continued: "The gains made by the Afghan people over the past two decades, including increased respect for human rights, especially for women, children and minorities, must be protected.

"Ireland has previously joined with the international community in highlighting that the future provision of support to the Afghan government is conditional on protecting and promoting human rights, especially for women and girls, and minorities.

"In this context, we are particularly concerned about reports of violence and coercion against women and girls, including reports of forced marriage and sexual violence and serious human rights abuses against civilians across Afghanistan.

"Ireland will host a meeting of the Informal Expert Group on Women, Peace and Security at the UN next week on the situation of women in Afghanistan.

"We are also monitoring the deteriorating humanitarian crisis in Afghanistan, which is exacerbating pre-existing challenges, including poverty, hunger, the ongoing drought and escalating violence in the country.

"We will respond to these urgent needs in partnership with the EU and UN agencies, the ICRC and international NGOs, while continuing to be a voice for the protection of civilians, humanitarian actors and human rights defenders in Afghanistan at the UN Security Council in line with our values."