Boxers Kellie Harrington and Brendan Irvine led their Olympic teammates into the new national stadium of Japan for the opening ceremony of the 32nd Olympic Games.

Ireland has its largest-ever Olympic team and they will compete in 19 of the 33 different sports in the Games.

The Tokyo Games opened with fireworks illuminating an almost empty National Stadium and a moment of silence to honour those lost to Covid-19, with a nod to Japanese tradition represented by wooden Olympic rings linked to the 1964 Games.

Postponed for a year, organisers were forced to take the unprecedented step of holding the Olympics without fans as coronavirus cases are on the rise.

Even the opening ceremony, normally a star-studded display teeming with celebrities was eerily silent, with fewer than 1,000 people in attendance, strict social distancing rules and signs calling on the spectators to "be quiet around the venue." Regardless, it marks a coming together of the world, with an audience of hundreds of millions around the globe and at various stages of the pandemic tuning in to watch the start of the greatest show in sport.

A vastly smaller number of athletes, about 20 per nation, marched in the teams' parade, with many flying in just before their competitions and due to leave shortly after to avoid infections.

Most groups just walked quietly and waved, but the Argentina delegation bounced up and down. 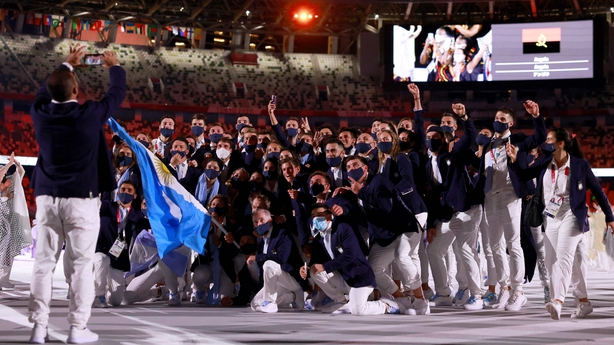 The opening video featured at the stadium recapped Japan's path to the Games and the challenges the world has faced since the selection of the Japanese capital as host in 2013.

It showed how in 2020 the coronavirus struck, with lockdowns forcing the unprecedented postponement only four months before the Games were supposed to open, setting off a roller-coaster period of uncertainty and preparations in isolation for the athletes.

A moment of silence was held "for all those family and friends we have lost," especially to the coronavirus, and mention was made of the Israeli athletes slain at the 1972 Munich Games.

Tokyo 2020 organisers said three more athletes had tested positive for Covid-19, bringing the total to 11 since 2 July. All Olympic related cases, including officials and media, rose by 19 to 106.

"I have no fear because everybody is tested every day and we all do our own things," Harringtion said at a press conference earlier.

"If you start worrying about that, you may as well pack your bags and go home like, you've got to focus on the competition." 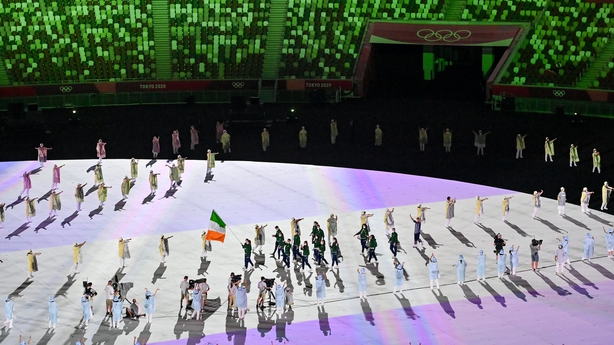 But the International Olympic Committee has doggedly persisted and barring a Covid-19 surge, 17 days of sporting lie ahead.

In the segment highlighting the impact of the pandemic on the athletes and people around the world unable to see the Olympics in person, the organisers showed a lone female athlete, Japanese boxer nurse Arisa Tsubata, training in the darkness, running silently on a treadmill.

Japanese Emperor Naruhito and International Olympic Committee (IOC) President Thomas Bach, both masked, entered the stadium and bowed to each other before sitting down socially distanced. 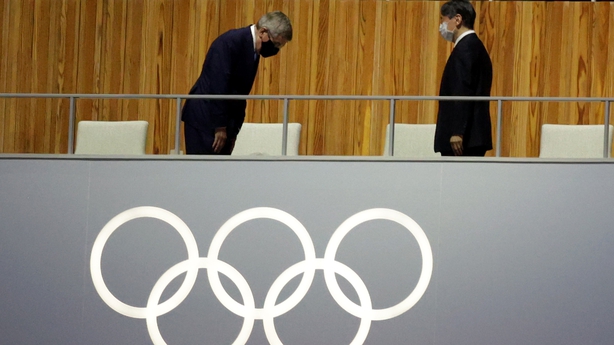 The giant wooden rings were carried onto the field on a platform, guided by the light of many paper lanterns. With the pull of a rope, the rings were transformed into the Olympic symbol. The rings make use of lumber from thinned trees that grew from the seeds borne by athletes from each of the participating nations to the previous Olympics hosted by Tokyo.

The opening is taking place without the usual mass choreography, huge props and cornucopia of dancers, actors and lights associated with past celebrations.

Only 15 global leaders are in attendance, along with Emperor Naruhito, who will formally open the Games as his grandfather Hirohito did in 1964, and US First Lady Jill Biden.

The ceremony is marked by high-profile absences, including former Prime Minister Shinzo Abe, who wooed the Games to Tokyo. A number of top sponsors and economic leaders will also stay away, highlighting strong opposition to the sporting extravaganza in Covid-fatigued Japan.

Hundreds of protesters carrying placards that read "Lives over Olympics" protested around the venue. The protesters, a mix of people in white surgical masks, yelled "Stop the Olympics" as they marched.

Only a third of the nation have had even one dose of vaccines, prompting worries the Games could become a super-spreader event.

The Games run until 8 August.

Meanwhile, Ireland's Sanita Pušpure made an impressive start to the Olympics, claiming an impressive victory in her first race of the Single Sculls event.

The two-time World Champion stormed to victory in her opening heat on a hot day at the Sea Forest waterway, winning in a time of 7:46.08 to book her place in the quarter-finals.