Former President of the High Court Nicholas Kearns has said that he is retiring from the board of the National Maternity Hospital with immediate effect as the recent by-election had "made things more complicated".

This is understood to be a reference to the recent Dublin Bay South by-election. In the run up to the vote, Tánaiste Leo Varadkar told the Dáil he had concerns about the governance and ownership structure of the new national maternity hospital planned for Elm Park. This reignited a long-running controversy.

Mr Kearns told RTÉ News that it would be a shame if the new hospital did not go ahead on the site and that there is "no plan B".

He brought forward his planned retirement as deputy chair of the National Maternity Hospital by two months.

The board of the hospital was told at the end of May that Mr Kearns would be standing down in September after six years in the role. On 14 July, the board was told that Mr Kearns was retiring as deputy chair with immediate effect.

Mr Kearns said that he had "delayed and delayed" his departure but it was now the right time to go. He said the by-election had made things more complicated and "there was no reason for me to hang around any longer". He said the exact date did not matter and now was a natural time to go.

The National Maternity Hospital has said that a process to appoint a successor was initiated earlier this year and an announcement will be made later this month. 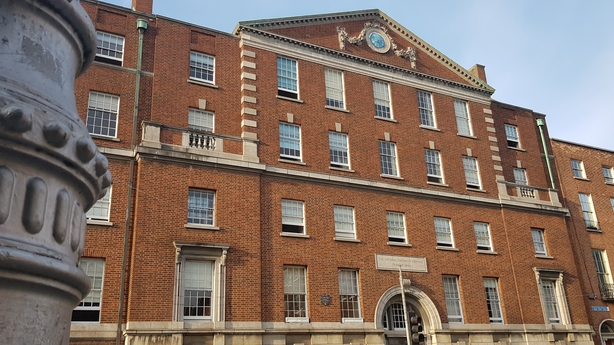 It has also emerged that difficult exchanges took place at the hospital's recent AGM held on 30 June. In the aftermath of the meeting, one of the hospital’s governors wrote to Mr Kearns and the other governors to discuss her unhappiness with the chairing of the meeting.

In the 6 July letter from Dr Frances Meagher, seen by RTÉ News, Dr Meagher suggested to Mr Kearns that he reflect on the manner in which he conducted the meeting.

She said that in particular, she was shocked by Mr Kearns’ language in an exchange with former Master Dr Peter Boylan. Dr Meagher said that Mr Kearns' response did not meet the standards expected of a Chair to respond in a measured and professional manner.

Dr Meagher concluded her letter by saying she had attended many NMH AGMs but "I cannot recall any occasion where I have felt as dismayed by the lack of professionalism exhibited by the Chair".

Mr Kearns said that he does not accept or agree with Dr Meagher’s characterisation of the meeting and he also said it had no bearing on his decision to bring forward his departure.

The hospital has declined to comment on the AGM or the letter which was reported by today’s Irish Times.

Master Shane Higgins paid tribute to Mr Kearns saying he had been an exceptional advocate for expectant mothers and babies.

Dr Boylan has been an outspoken critic of the terms of the deal to move the National Maternity Hospital to a new site at Elm Park. He has previously called for Mr Kearns’ resignation.

In a statement to RTÉ News, Dr Boylan said he welcomed Mr Kearns’ resignation. He said that the "serious problems" with the project to co-locate the NMH stem from what he said was an extraordinary decision to cede ownership of the new hospital to the Religious Sisters of Charity in 2016.

Dr Boylan said it was now up to the Government to find a solution acceptable to the women of Ireland and that would require State ownership of the land on which the new hospital is to be built.