A ceremony marking the annual National Day of Commemoration has taken place at Collins Barracks in Dublin.

The National Day of Commemoration remembers all Irishmen and Irishwomen who died in past wars or on service with the United Nations.

The event also marked the 100th anniversary of the truce in the Irish War of Independence between 1919-21.

More than 2,000 people were killed in the conflict before a truce came into effect at noon on 11 July 1921.

President Michael D Higgins laid a wreath on behalf of the people of Ireland, after which one minute of silence was observed.

The event was held in accordance with Covid-19 public health guidelines and was not open to members of the public. 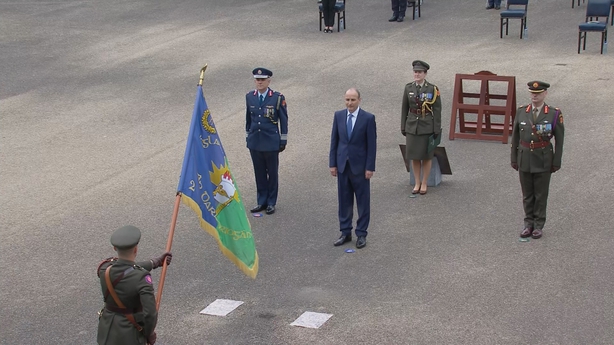 Taoiseach Micheál Martin delivered a speech in which he said: "It is fitting that we remember here today all those Irishmen and Irishwomen who died in past wars or on service with the United Nations.

"On this day we recall the truce which came into effect 100 years ago. In particular we remember those who died in the War of Independence and subsequent conflict on this island."

In a statement, President Higgins reflected on what happened 100 years ago in Ireland.

He said: "It is appropriate to recall how the people in the streets of villages, towns and cities hoped and prayed for peace.

"Twice in the previous three years they had expressed their wishes at the ballot box. That expression was rejected.

"Hardly a year earlier, proposals for peace from Archbishop Clune had been rejected, as had the united voice of trade union members.

President Michael D Higgins laid a wreath at a ceremony marking the annual National Day of Commemoration, after which a minute's silence was observed | Read more: https://t.co/vpzT5wyuCx pic.twitter.com/Zw0oJCtaNk

"As they gathered, anticipating, hoping for a truce that would lead to an enduring peace, they were carrying the grief of the 1918 flu epidemic; and ahead would be the tragic experience of the Civil War.

"The signing of a truce between the combatants is an event that should be commemorated as a thirst for peace deferred.

"So many lives and so much suffering could have been spared had the democratic will as expressed by the people been respected."

Also in attendance at the event on Sunday was UK Ambassador to Ireland Paul Johnston, church leaders and Northern Ireland deputy First Minister Michelle O'Neill, as well as the DUP mayor of Derry City and Strabane Graham Warke.