An investigation is under way after three men were killed in a collision between a car and a lorry on the N7 at Rathcoole in Dublin.

The car, which was on the wrong side of the northbound carriageway, collided with the truck travelling in the opposite direction at around 11.40pm last night.

The men who died were in the car. They are believed to be in their 20s and 30s.

The driver of the lorry was taken to Tallaght University Hospital with serious injuries. 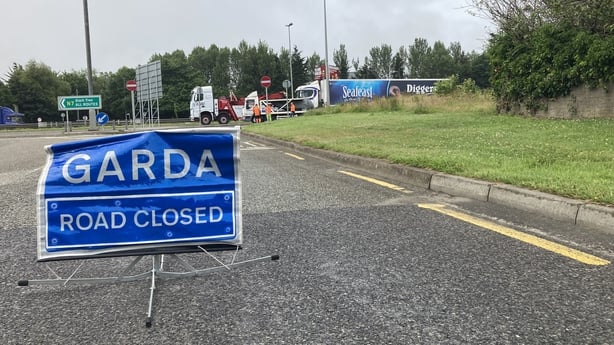 The bodies of the three men have been removed to the City Morgue in Dublin where post-mortem examinations are being carried out.

All three are believed to be from the southwest Dublin area, with two understood to be from Tallaght.

Gardaí said they were not in a position to confirm their identities at the moment.

The incident has been referred to the Garda Síochána Ombudsman Commission (GSOC) after the way the car was being driven came to the attention of gardaí at around 11.30pm.

A pursuit ensued but gardai said it did not continue when the car was driven the wrong way onto the N7.

GSOC is also asking witnesses or anyone with footage of the crash to contact it on 1890 600 800 or info@gsoc.ie.

The car and lorry involved in the fatal crash on the N7 inbound beside Citywest being removed from the scene. pic.twitter.com/uxuIL7RuWj