Tour de France organisers have said they are suing a spectator who caused a crash after German cyclist Tony Martin was sent tumbling when he rode straight into a sign being held out by a fan looking the other way at a television camera.

The spectator's cardboard sign read "Allez Opi-Omi" (Come on grandad-granny, in a mix of French and German).

The incident created chaos with 21 riders injured in the ensuing collisions, with 47km left of the 198km stage from Brest to Landerneaustage.

It also claimed the race's first victim, with German Jasha Suetterlin of Team DSM abandoning the Tour due to the injuries he sustained. 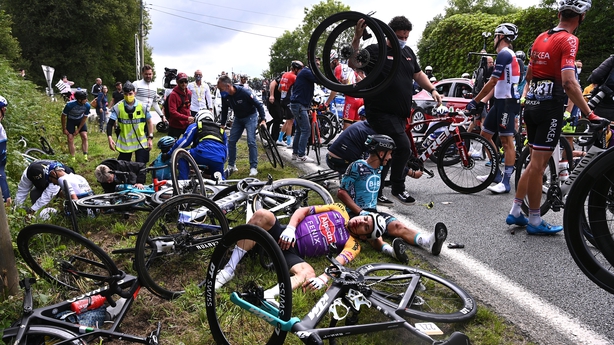 Another huge pile-up with about 7km left brought down four-time champion Briton Chris Froome and others.

Frenchman Julian Alaphilippe recovered from a crash to win the first stage of the Tour to take the inaugural leader's yellow jersey yesterday.