An engineer warned of "major structural damage" at a Florida apartment building three years before it partially collapsed, a report said today, as rescuers raced to find 159 people still unaccounted for in the mountain of debris.

Four people have been confirmed dead after the 12-storey oceanfront building in Surfside, near Miami Beach, pancaked as residents slept inside in the early hours of Thursday.

Dozens are still missing, fuelling fears of a much higher death toll as rescuers sift through the debris with heavy machinery and sniffer dogs, and as increasingly frustrated families wait more than 48 hours on.

Authorities and experts have stressed that the causes for Champlain Tower South's collapse are still unknown, and will take time to investigate.

But with questions about its condition growing, a report in the New York Times today said that a consultant found "major structural damage" to the concrete slab below a ground-level pool deck and "abundant" cracking and crumbling in the parking garage three years before the disaster.

"Though some of this damage is minor, most of the concrete deterioration needs to be repaired in a timely fashion," the consultant wrote in 2018, the report said.

According to the newspaper, most of the damage was "probably caused by years of exposure to the corrosive salt air along the South Florida coast".

It said the consultant did not indicate that the 40-year-old building risked collapse, but needed repairs to maintain "structural integrity".

A lawyer for the building's owners told the newspaper plans had been drawn up and they were "just about to get started" on the multi-million dollar repairs.

Completed in 1981, Champlain Towers was due for a safety recertification this year, and was undergoing construction work on its roof as part of that process. 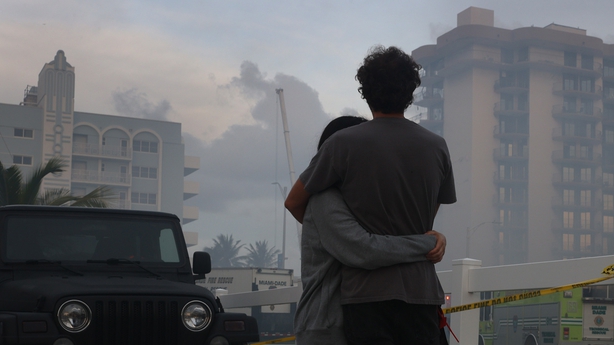 According to a study led by Florida International University, the site also showed signs of land subsidence in the mid-1990s.

Officials have stressed it is unclear how many people were actually inside at the time of the collapse, which pancaked around 55 apartments.

Miami-Dade County mayor Daniella Levine Cava said late yesterday that authorities had found no one else.

"But through the night we will continue, and God willing, there will be some good news later tonight or in the morning," she told a news conference.

"All of our training tells us that for at least the first 72 hours, there are high likelihood of people that could be alive in there," Danny Cardeso, with Miami-Dade Fire Rescue, told CBS News.

Officials in Canada said yesterday that at least four of its citizens may be "affected," without elaborating. At least 18 Latin American nationals are among the missing - including Uruguayans, Argentines and Paraguayans.

Faced with the painstakingly slow search, some families voiced frustration.

"Not enough is being done," said Mike Salberg, who came from New York after the accident. Five of his family members, including his parents, are unaccounted for.

Others were preparing for the worst. "My friend's mom is there (under the rubble)," a man who gave his name only as Mark said.

"We want to be hopeful but also we have to be realistic. The next step is being there for the families and know why this happened."