"It was not possible to agree today that we should meet immediately at the top level," she said after talks between the bloc's leaders at an EU summit in Brussels.

Ms Merkel said that leaders had agreed to maintain and develop a "dialogue format" with Russia.

"I would have liked to see a bolder step here, but it is also good this way and we will continue to work on it," she said.

Lithuanian President Gitanas Nauseda said: "there will be no meetings at the European Union leaders' level with Russia."

"We see that the situation of our relations with Russia is deteriorating and we see new aggressive forms in behaviour of Russia," he said.

Berlin and Paris had blindsided their EU counterparts by putting forward a last-minute proposal for the bloc to resume meetings with President Putin in the wake of US President Joe Biden's sit-down with him in Geneva last week.

There was opposition from numerous member states, especially in eastern Europe, who remain deeply wary of rewarding the Kremlin with talks before it changes course.

Moscow said yesterday that Mr Putin was a "supporter" of the proposal, which would have potentially revived a regular fixture frozen in 2014 after the takeover of Crimea by Russia. 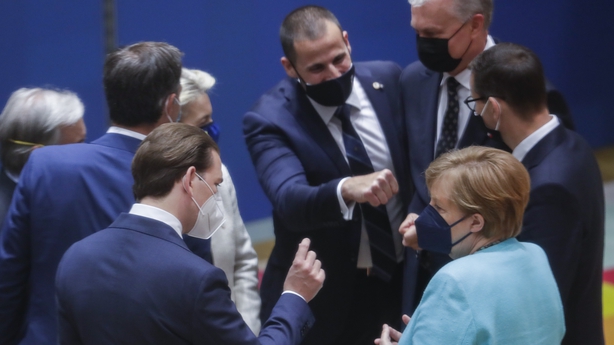 The last summit between EU chiefs and Mr Putin took place in early 2014, but the Kremlin strongman has always preferred to deal bilaterally with individual nations.

The EU is looking to revamp its strategy on keeping its vast eastern neighbour in check as Brussels admits that relations with the Kremlin look set to deteriorate further despite having already reached their "lowest level".

Moscow has been at loggerheads with a number of Western capitals recently after a Russian troop build-up on Ukraine's borders and a series of espionage scandals that have resulted in diplomatic expulsions.

Meanwhile, Dutch Prime Minister Mark Rutte suggested that Hungary should leave the EU if it is not prepared to adhere to its values.

He made the remarks during sharp exchanges between EU leaders and Hungarian Prime Minister Viktor Orban over a new law that would ban the issue of homosexuality from education and restrict its depiction in the media.

The alleged roll back of media and academic freedoms, judicial independence, and increasing attacks on migrants and the LGBT community in Hungary has long been a source of tension at EU level.

French President Emmanuel Macron asked what had become of Mr Orban, who had once been a leader of the movement to end Soviet rule in his country.

Ms Merkel said children who were coming to terms with their sexuality should be able to receive support from the Hungarian state.

Mr Orban defended the law saying it protects children and leaves sexuality in the hands of parents.

However, the EU said the law equates homosexuality with paedophilia.