Four people were confirmed dead and 159 unaccounted for following the collapse of an apartment block near Miami Beach, as rescue teams scoured a mountain of rubble in a desperate search for survivors.

As shock set in among the local community in Surfside, the state's governor called for full light to be shed without delay on the causes of the freak disaster - which reduced one wing of a 12-story tower to debris.

Miami-Dade County mayor Daniella Levine Cava said authorities were still without news of 159 people who may have been asleep in Champlain Tower South at the time of the collapse, fueling fears of a much higher death toll.

"We will continue search and rescue because we still have hope that we will find people alive," she told a news conference - describing the dedication of dozens of rescuers on site.

"They are totally, totally motivated to find people. They have to be pulled off the shift."

Four people have been confirmed dead and 159 people are still unaccounted for following the collapse of a Florida apartment block. Miami-Dade Mayor Daniella Levine Cava said it has been a 'tragic night'. | Read: https://t.co/cosEZhMvS4 pic.twitter.com/U4Jh2k1LoX

Rescue teams with sniffer dogs worked through the night and into a second day - with recovered bodies put into yellow bags and transported away as homicide detectives worked to confirm the identities of the victims.

But faced with the painstakingly slow search operation, some began to voice their frustration.

"Not enough is being done," said one man who has five family members, including his parents, unaccounted for.

"I want answers," he told AFP. "The families are sidelined. We're being told that they have the best crews but they don't have the ability and the capacity... 40 hours later, four dead."

US President Joe Biden - who has ordered federal assistance for the relief effort - sent a message of support to the families, calling it a "tough, tough time".

"There are so many people waiting. Are they alive? What will happen? So our heart goes out to them," he said at the White House.

Mr Biden spoke earlier today with Governor Ron DeSantis, who said the families deserved "a definitive explanation for how this could have happened".

The Surfside building, which had around 55 apartments, was occupied by a mix of full-time and seasonal residents and renters, and officials have stressed it is unclear how many people were actually inside at the time of the collapse.

Relatives of the missing have been gathering at a local community centre, while occupants lucky enough to have been away when disaster struck are contemplating sudden homelessness.

"We have hope. And every time that we hear sound, we concentrate in that area." 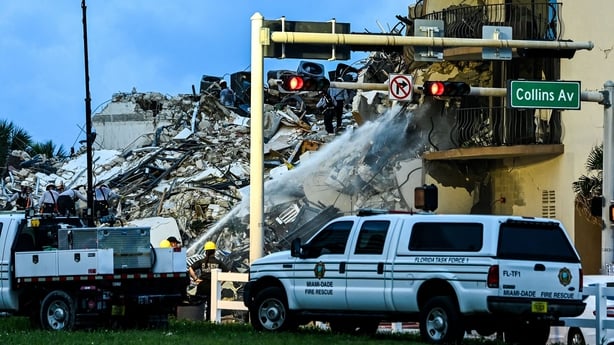 While the reasons for the collapse remain unclear, the condition of the 40-year-old waterfront building is certain to face scrutiny.

Completed in 1981, Champlain Towers was due to be recertified this year in line with Miami-Dade county safety regulations, and was undergoing construction work on its roof as part of that process.

According to a study led by Florida International University environment professor Shimon Wdowinski, based on space-based radar data, the site showed signs of land subsidence in the mid-1990s.

"I don't know if the collapse was predictable. But we did detect that the building moved in the 1990s," Mr Wdowinski told CNN, describing what was happening as a "slow process" of settling, rather than sinking.

Another of the university's experts, Atorod Azizinamini, chair of its department of civil and environmental engineering, said in an online video that it was too soon to speculate on a cause.

He said structural engineers would collect vast quantities of data on design plans and construction methods, take samples of steel and concrete, look at signs of corrosion, examine the foundation, and try to detect any unusual event before the collapse.

"Once we have all the information we can simulate exactly different scenarios, and we can pinpoint how the collapse took place," Mr Azizinamini said.

"Unfortunately that is not going to be happening in a matter of days, weeks."

"It's going to take some time."