An inquest into the death of George Nkencho has heard that his cause of death was due to multiple gunshot wounds to the trunk.

Mr Nkencho was shot dead by an armed garda outside the family home in Clonee, Co Dublin, last December.

The inquest at the Dublin District Coroner's Court, which was sitting at the RDS, was officially opened this morning before being adjourned until 14 December.

Coroner Myra Cullinane gave details of Mr Nkencho's autopsy, which revealed there were no other contributory factors that caused his death.

Senior Investigating Officer with GSOC Stuart Duguid addressed the inquest to seek an adjournment until this investigation has concluded.

Mr Duguid said GSOC's investigation is part-way through and that he is looking towards the end of the year to try to conclude matters.

However, he added that investigators are yet to speak to members of An Garda Síochána who were present on the day of Mr Nkencho's death.

Prior to adjourning the inquest for six months, the coroner said she was not allowed to hear evidence until any other investigation is concluded.

Ms Cullinane also said there was the potential for the GSOC investigation to lead to other proceedings that could again delay the inquest.

Sean Rafter BL, instructed by solicitor Phelim O'Neill, was appearing at the inquest on behalf of the Nkencho family.

Mr Rafter said the family was fully aware that the inquest must be adjourned and that the family continues to work closely with GSOC.

He also said that the family is urging the court to consider the specific circumstances of Mr Nkencho's death, as well as the broader circumstances of the death of a young black man at the hands of white police officers, and wider issues of policing.

Mr Rafter added that Mr Nkencho's siblings were in ear-shot of the incident.

Ms Cullinane expressed her condolences to the Nkencho family over George's death and the stress caused to the family. 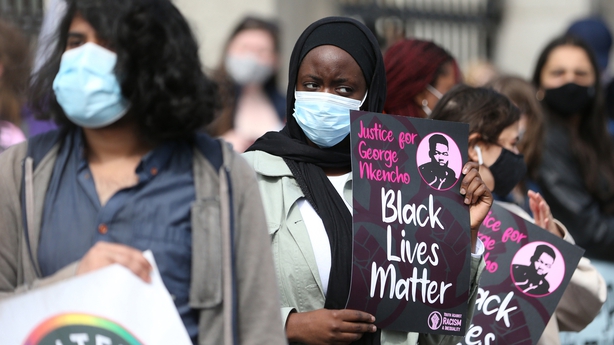 Before adjourning the inquest, she told the family "the court commiserates with you".

As the inquest got under way, a rally was held outside the RDS in support of Mr Nkencho and his family.

Around 50 people attended that event.