The identity of the new leader of the DUP could be known as soon as Tuesday if there is no need for an election.

Nominations opened today and will close at 12 noon on Tuesday.

Lagan Valley MP Jeffrey Donaldson, who lost out to Edwin Poots by 19 votes to 17 in a leadership contest just a few weeks ago, is the overwhelming favourite to replace him.

If more than one candidate applies, the party's electoral college, consisting of its 28 Stormont Assembly members and 8 Westminster MPs, will vote on Saturday.

Nominations for the leadership of the Democratic Unionist Party have opened and will close on Tuesday. If no one opposes Jeffrey Donaldson, who is the clear favourite, he will become leader with a special meeting to ratify him the following week | https://t.co/oLZWA3RAzd pic.twitter.com/p8Mle51y5B

But if Mr Donaldson is the only candidate, senior party sources say he may be declared the designated leader on Tuesday afternoon.

The decision would need to be formally ratified at a special meeting the following week.

Northern Ireland's new First Minister Paul Givan, who was only appointed on Thursday, has been told that he will be asked to resign soon after the new party leader is appointed.

Resigning now would plunge Northern Ireland into a fresh political crisis as that would trigger a seven day deadline for the DUP and Sinn Féin to agree to go back into power sharing together.

The DUP is not ready for that process as it has no leadership team in place to take part in negotiations with Sinn Féin.

It is understood that a number of of the DUP's ruling party officers spoke to Mr Givan yesterday and informed him that his time as First Minister will be short lived.

Mr Donaldson has said he plans to resign his Westminster seat and lead the party from Stormont as First Minister, but may have to install someone on an interim basis.

But that process would be accelerated if Mr Givan was to later step down from politics entirely as Mr Donaldson could then be co-opted as his replacement.

Mr Givan first joined the Stormont Assembly when he was co-opted to replace Mr Donaldson when a ban was introduced prohibiting people having a dual mandate and being an MLA as well as an MP.

Party chairman Maurice Morrow said: "Following a meeting of the party officers in Belfast today the following decisions were taken.

"The party officers have set the date of June 26 as the date for a meeting to elect a new leader.

"In accordance with the constitution and rules of the Democratic Unionist Party only party members, who are also members of the Northern Ireland Assembly and the House of Commons are entitled to vote for the leader or deputy leader. Details have been sent to all eligible voters."

Meanwhile, the Taoiseach has said that there is a "middle ground" emerging in Northern Ireland of people who want politics to work and who want the institutions there to work and prevent further instability.

Speaking in Cork this afternoon, Micheál Martin said that there is a capacity among the political parties in Northern Ireland to work constructively together, as has already been proven throughout the Covid-19 crisis.

He said the Government wants to "assist and be constructive in terms of the continuation of the Assembly and the Executive".

The maintenance and continuation of the institutions in the north, such as the Assembly and the Executive, is a prerequisite for stability, Mr Martin said.

"We can resolve all of the issues through the political process. In terms of the Good Friday Agreement, the British and Irish governments stand together as guarantors of the institutions and of the agreement itself, we're willing to work with all parties on a constructive basis and to build relationships, and also then in parallel to work with the United Kingdom government and the European Union, as members of the European Union, to resolve issues that have arisen in respect of the protocol," he said.

Minister for Foreign Affairs Simon Coveney has said that efforts to "demonise" the Irish Government and its officials in Northern Ireland are "really unwelcome, unhelpful" and drive more polarisation and tension.

Mr Coveney called on politicians who represent loyalist and unionist communities to come out and clarify that there is no threat to officials or politicians from the Irish Government following a statement from the Loyalist Community Council.

Speaking on RTÉ's Saturday with Justin McCarthy, he said that the comments are "not the way we are going to solve anything" and that dialogue and discussion is what is needed.

He said that "the idea that there would be a signal that an Irish Government is not welcome in Northern Ireland is a huge backward step."

The minister said that the idea that the loyalist community is blaming the Government for "all the woes linked to Brexit simply isn't accurate" and that the Government is looking for "the compromises and pragmatism" to ensure the Northern Ireland Protocol can be implemented in a way that is more acceptable.

He said the issues in the protocol that are of concern to some loyalists were negotiated and agreed between the UK and the EU, and the Irish Government was only a part of those discussions.

A rally against the Northern Ireland Protocol last night heard calls for the DUP not to nominate a new First Minister until it is abandoned.

Several hundred people turned out in Newtownards in Co Down last night for a protest against the protocol, which was organised by former British Labour politician Kate Hoey and Ben Habib, a former Brexit-supporting MEP. 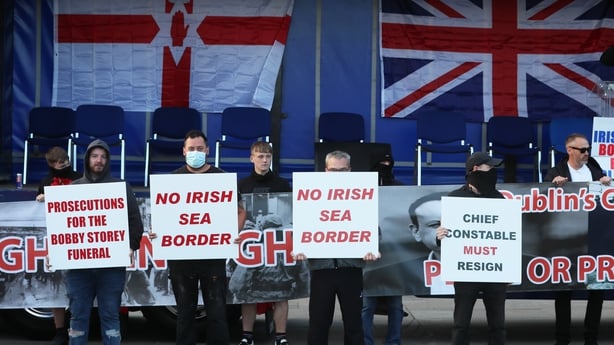 "They chose to please IRA Sinn Féin. Why? Because they had the measure of the DUP.

"And it was that spineless, hopeless, pathetic, useless attitude that enabled them to do it."

He added: "What do we now need to do? What needs to be done in Stormont is the new DUP leader needs to find a backbone, and he needs to resign the First Minister.

"He needs to say to the British prime minister, there will be no First Minister so long as there is a protocol."

Mr Allister claimed the protocol was "designed to partition the United Kingdom" and to "annex" Northern Ireland into the EU.

He said the EU were "preparing us for what they see as the ultimate outcome of Irish unity", which was greeted with chants of "never" and "over my dead body" from the crowd.

Ms Hoey said the protocol is "taking away our British identity" and accused the Irish Government of using Northern Ireland as a "weapon".

She added: "I'm afraid the wining and dining that goes on in Brussels paid off.

"The EU wanted to punish the United Kingdom for daring to leave their club and cynically used the issue of the Irish border and the Belfast Agreement as the weapon."

The demonstration saw five protest parades marching towards the town centre in Newtownards.

Hundreds of protesters waved Union flags and held banners saying "Dublin's Choice: Peace or Protocol?", which bore an image of Tánaiste Leo Varadkar, as well as "No Irish sea border" and "Enough is enough".

Mr Habib told the crowd: "The real villains in this story are the EU and the Irish Government, because they have falsified and misrepresented entirely what the customs border on the island of Ireland would be.

"But I'm afraid that those to whom you have given your allegiance, the Westminster government, they are the ones who have really forsaken you because they should have stood up to that false narrative."