The latest talks between the UK and the EU on the implementation of the Brexit Withdrawal Agreement in Northern Ireland have ended without agreement.

However, the topic of the Northern Ireland Protocol is likely to follow UK officials from London to Cornwall, where the G7 summit kicks off this week.

Why is the Northern Ireland Protocol causing issues?

Britain is reportedly ready to act unilaterally to delay imposition of checks on chilled meats such as sausages and chicken nuggets coming to Northern Ireland from Britain when the current "grace period" expires at the end of June.

This deal - intended to ensure there is no return to a hard border with the Republic - means that Northern Ireland remains part of the EU single market, which in turn requires checks on some goods coming from Britain.

While this so-called "sea border" was seen as a compromise during lengthy Brexit talks, it has caused fury among unionists, who see it as a denigration of their union with Britain.

What was today's meeting about?

Senior figures from the European Commission and the British government met in London today to review the operation of the Northern Ireland Protocol. The meeting concluded without agreement.

Britain's minister in charge of EU relations, David Frost, hosted his EU counterpart Vice President Maroš Šefčovič for a meeting of the EU-UK partnership council, which governs the post-Brexit trading relationship between the two sides. 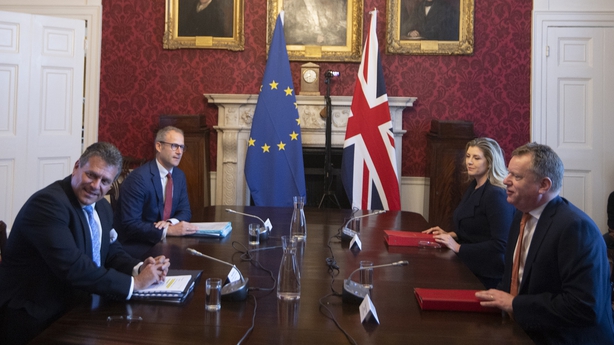 A war of words between Mr Frost and Mr Šefčovič has sparked in recent days, as the ever-increasing tension surrounding the Northern Ireland Protocol reaches boiling point.

In an op-ed in the Daily Telegraph, Mr Šefčovič wrote: "If the UK takes further unilateral action over the coming weeks, the EU will not be shy in reacting swiftly, firmly and resolutely to ensure that the UK abides by its international law obligations."

In a statement released before today's meeting, Mr Frost said threats of a trade war will not wash with voters.

"Further threats of legal action and trade retaliation from the EU won’t make life any easier for the shopper in Strabane who can’t buy their favourite product. Nor will it benefit the small business in Ballymena struggling to source produce from their supplier in Birmingham," he said.

This week's G7 summit will mark Joe Biden's first international visit as US President. President Biden, who frequently references his Irish heritage, is expected to use his meeting with Mr Johnson to explicitly express US support for the protocol.

Earlier this month, a group of prominent Irish-Americans called on the 46th US President to "stand up" for the Good Friday Agreement when he meets with Johnson.

The Ad Hoc Committee to Protect the Good Friday Agreement urged Mr Biden to use the meeting as an opportunity to inform Mr Johnson that he will be appointing a US Special Envoy to Northern Ireland.

Last year, while running for the presidency, Mr Biden ruled out any future trade accord between the US and the UK if Westminster does not respect the Good Friday Agreement.

"Any trade deal between the US and UK must be contingent upon respect for the agreement and preventing the return of a hard border. Period," he tweeted.

Speaking to reporters after the meeting, Mr Šefčovič said he cannot speak for President Biden, but he knows the Americans are following this issue closely.