The Government has recognised Israel's illegal settlements as a de facto annexation of Palestinian land.

Minister for Foreign Affairs, Simon Coveney, said a Sinn Féin motion on the issue "is a clear signal of the depth of feeling across Ireland."

"The Government shares that grave concern," he said.

He said that Ireland is the first EU state to say so, adding that he does not "do it lightly".

However, Mr Coveney said that he had been "deeply troubled" by Sinn Féin's refusal "to call on Hamas to respect international law" in the motion, let alone condemn its attacks on Israel.

The Government would support the motion if an ammendment to include that condemnation was included.

Tonight the amendment was adopted.

Deputy Brady said that since January, Israel has approved 2,500 additional settlement dwellings. 460 of these are in East Jerusalem, he said.

The organisation Peace Now said that in 2020, Israel had "approved or advanced" 12,000 settlement units, he added, the most since the group began monitoring this in 2012.

A ceasefire brokered by Egypt with the help of the US came into effect in Gaza on Friday.

It followed the worst violence in recent years.

At least 254 Palestinians were killed, including 66 children with 10 deaths in Israel. Almost 2,000 people were injured. 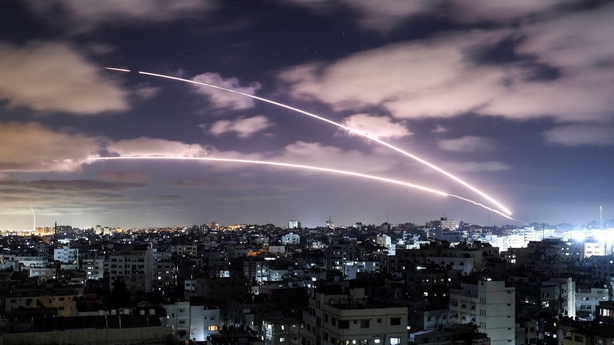 Sinn Féin TD Brian Stanley said the world had "looked on in horror" at the violence.

Gary Gannon said the Social Democrats were proud to co-sign the motion.

"Through deliberate, brutal, calculated action" Israel sought to undermine the prospect of an independent Palestinian state, he said.

The US will veto any strong statement on Israel at the UN, he warned. He added that a consensus approach was not possible.

It was "shocking" that it took two weeks to get "a press statement" from the United Nations Security Council, Mr Howlin told the Dáil.

Richard Boyd Barrett, Solidarity-PBP, repeated his call for the Israeli ambassador to be expelled. Anything less than a complete boycott on Israel "is meaningless", he said.

Mary Lou MacDonald, Sinn Féin leader, said the Dáil stands in solidarity with the Palestinian people. She accused Israel of being a "serial violator of international law".

Today represents "the most explicit and united call from this parliament against annexation", she said.

Deputy MacDonald called on the Government to "hold Israel to account".

She said the case of Palestine is "the acid test for the international community".

"Do we stand with the brutalised, traumatised refugees of Gaza - or with the Israeli military machine?" she asked.

Sinn Féin's Imelda Munster told Minister Coveney that Ireland's seat on the Security Council entails a responsibility to stand up for the vulnerable.

The Dáil will vote tomorrow on a People Before Profit amendment of the Sinn Féin Private Members motion.

If passed, the amendment would require the Government to expel the Israeli Ambassador to Ireland and seeks economic, political and cultural sanctions against Israel.