UN Secretary-General Antonio Guterres has pleaded for an immediate end to deadly Israeli-Palestinian violence, warning a Security Council meeting that the fighting could plunge the region into an "uncontainable" crisis.

Mr Guterres condemned the fresh violence on Sunday which killed at least 42 Palestinians, the worst death toll since the unrest broke out.

The heaviest fighting since 2014, sparked by unrest in Jerusalem, saw the rivals again trade heavy fire, with the death toll rising to 188 in the crowded coastal enclave of Gaza and to 10 in Israel since Monday, according to authorities on either side.

"Fighting must stop. It must stop immediately," Mr Guterres said as he opened a Security Council session delayed by Israel's ally the United States, calling the violence that has killed nearly 200 people over the past week "utterly appalling."

"It has the potential to unleash an uncontainable security and humanitarian crisis and to further foster extremism, not only in the occupied Palestinian territory and Israel, but in the region as a whole," he said.

UN Secretary-General Antonio Guterres has pleaded for an immediate end to deadly Israeli-Palestinian violence, warning a Security Council meeting that the fighting could plunge the region into an 'uncontainable' crisis | Read more: https://t.co/Af5wKYyNX7 pic.twitter.com/JrrADF6oZs

"This senseless cycle of bloodshed, terror and destruction must stop immediately," he said.

He also renewed criticism of an Israeli strike on Saturday that destroyed the Gaza offices of two major news outlets, Al-Jazeera and the Associated Press.

"Journalists must be allowed to work free of fear and harassment. The destruction of media offices in Gaza is extremely concerning," he said.

Israel launched its air offensive after Hamas, the Islamist militant movement that controls Gaza, began firing rockets in response to the state's moves in Jerusalem.

"Rockets and mortars on one side and aerial and artillery bombardments on the other must stop. I appeal to all parties to heed this call," Mr Guterres said.

He also voiced alarm at the rise of extremist Jewish movements whose push to expel Palestinians out of Jerusalem helped trigger the crisis. 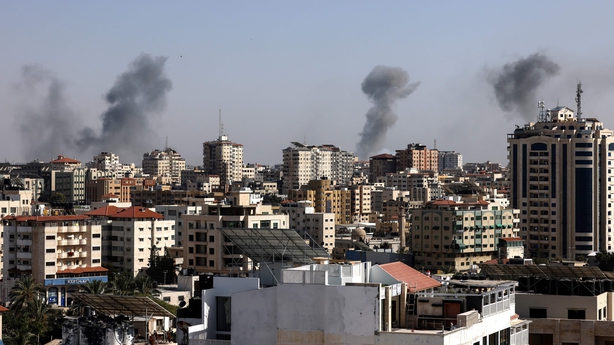 "In Israel, violence by vigilante-style groups and mobs has added a further horrendous dimension to an already deteriorating crisis," Mr Guterres said.

"Leaders on all sides have a responsibility to curb inflammatory rhetoric and calm the rising tensions."

Palestinian Foreign Minister Riyad al-Malki told the Security Council: "Each time Israel hears a foreign leader speak of its right to defend itself it is further emboldened to continue murdering entire families in their sleep."

UN Middle East envoy Tor Wennesland urged the international community to "take action now to enable the parties to step back from the brink."

Truce efforts by Egypt, Qatar and the United Nations have so far offered no sign of progress.

The US sent an envoy to the region and President Joe Biden spoke with Israeli Prime Minister Benjamin Netanyahu and Palestinian President Mahmoud Abbas on Saturday.

The UN Security Council meeting comes amid criticism for the US, which had blocked a UNSC meeting scheduled for Friday, for not doing enough to stem the bloodshed.

Minister for Foreign Affairs Simon Coveney has called for an immediate cessation of violence in the Middle East.

Speaking at the UN Security Council he said 'the cycle of violence and bloodshed must end now' | Read more: https://t.co/0OvWqp8CKv pic.twitter.com/vdLmedBQZD

At the meeting, Minister for Foreign Affairs Simon Coveney called for an immediate cessation of violence.

"The Security Council needs to send a clear and united message that the cycle of violence and bloodshed must end now," he said.

"I call for de-escalation and an immediate cessation of attacks. All those involved in violence have obligations under International Humanitarian Law," he added.

He urged a clear and united message from the Council, adding the re-occurence of violence ''shames us all''

Mr Coveney called on the UN council to exercise its responsibility starting with calls for an end to the violence and progress towards a just and lasting peace.

"The protection of all civilians, in Gaza, in the West Bank and in Israel is of paramount important," Mr Coveney said.

"All violations against children must end, including attacks on schools. The UN must be permitted to bring in vital fuel, food, and medical supplies and to deploy humanitarian personnel," he added.

He condemned the strike which destroyed media outlets.

Mr Coveney called on all parties to refrain from violent and provocative acts.

He said this includes rockets and incendiary devices launched from Gaza into Israel by a terrorist organisation targeting civilian populations.

The Minister added that Israel must abide by international humanitarian law. He said Ireland called on Israel to ensure that its defence forces act in full respect for the principles of proportionality during military operations.

''The plight of children in this conflict is reprehensible',' he said. ''No child anywhere should have to deal with the onslaught of rockets and missiles.'' Israel said this morning its "continuing wave of strikes" had in the past 24 hours struck over 90 targets across Gaza, where the destruction of a building housing news media organisations sparked international outcry.

"Hamas misjudged the strength of our response" to its rocket barrage, said Aviv Kochavi, the Israeli army's chief of general staff, saying Gaza had since been enduring an aerial bombardment of unprecedented "intensity".

In Gaza, the death toll kept rising as emergency teams worked to pull out bodies from vast piles of smoking rubble and toppled buildings, as relatives wailed in horror and grief.

Israel's army said about 3,000 rockets had been fired from the coastal strip controlled by Hamas towards Israel, "of which approximately 450 failed launches fell in the Gaza Strip".

Israel's Iron Dome anti-missile system had intercepted over a thousand rockets in almost a week during which Israeli residential buildings have been hit, with over 500 people wounded.

The bloodiest military conflict in seven years has also sparked a wave of inter-communal violence and mob attacks between Jewish people and Arab-Israelis, as well as deadly clashes in the occupied West Bank, where 19 Palestinians have been killed since last Monday.

The Israel Defense Forces said it had targeted the infrastructure of Hamas and Islamic Jihad, including by pounding a vast tunnel system with some 100 strikes, and by targeting weapon factories and storage sites.

Israeli air strikes also hit the home of Yahya Sinwar, head of Hamas' political wing in the Gaza Strip, the army said, releasing a video showing plumes of smoke and intense damage, but without saying if he was killed.

At least 52 children have lost their lives in Gaza, 1,225 people have been reported wounded and entire buildings and city blocks reduced to rubble.

The IDF says it takes all possible precautions to avoid harming civilians and has blamed Hamas for deliberately placing military targets in densely populated areas.

One strike on Gaza killed 10 members of an extended family.

Some 10,000 Gazans have fled their homes near the Israeli border for fear of a ground offensive, the UN said.

"They are sheltering in schools, mosques and other places during a global Covid-19 pandemic with limited access to water, food, hygiene and health services," UN humanitarian official Lynn Hastings said.

Balls of flame and a cloud of debris shot into the sky yesterday afternoon as Israel's air force flattened the 13-floor Gaza building housing Qatar-based Al Jazeera and the Associated Press news agency, after giving a warning to evacuate.

Al Jazeera's Jerusalem bureau chief, Walid al-Omari, told AFP: "It is clear that those who are waging this war do not only want to spread destruction and death in Gaza, but also to silence media that are witnessing, documenting and reporting the truth."

AP President and CEO Gary Pruitt said he was "shocked and horrified" by the attack.

Israeli defence officials said the building housed not only news bureaus but offices of Hamas militants.
AFP Chairman Fabrice Fries said the agency "stands in solidarity with all the media whose offices were destroyed in Gaza" and called on all parties "to respect the media's freedom to report on events".

US Secretary for Israel-Palestinian Affairs Hady Amr is to hold talks with Israeli leaders before meeting Palestinian officials to seek a "sustainable calm", the State Department said.

European Union foreign ministers are to discuss the crisis on Tuesday, with German Foreign Minister Heiko Maas calling the situation "highly explosive" and pleading for "an end to the violence".