The Chief Medical Officer has outlined which groups of people can benefit from the so-called "vaccine dividends" and the timelines for the various different vaccines.

People who have been vaccinated can avail of some additional freedoms, known as the vaccine bonus, or vaccine dividend.

These benefits also apply to people who have had laboratory-confirmed Covid-19 infections in the past six months.

Speaking at the Department of Health's Covid-19 briefing, Dr Tony Holohan said those who have been given the first dose of the AstraZeneca vaccine will be able to avail of the dividends four weeks after the jab.

Those given the single-shot Johnson and Johnson vaccine will be able to avail of them two weeks after their jab.

The benefits that apply to vaccinated people will also apply to people who have had Covid-19 (confirmed by a PCR test) in the last six months. | Read more: https://t.co/ojWhHCCE87 pic.twitter.com/MRh28Jb4JU

He also said those who have not had a vaccine but who have had Covid-19 in the last six months, confirmed by a PCR test, can also avail of the dividends.

Dr Holohan said people for which the "vaccine bonus" applies can meet up with unvaccinated people provided they are in a low-risk group.

He said a practical example of this is vaccinated grandparents meeting grandchildren, provided nobody in the household of the children is high-risk.

Dr Holohan said the differing thresholds defined for the vaccine dividend are based on the differences in the biological response to differing vaccines.

He said the peak immune response comes at different times.

Meanwhile, Fine Gael is projecting that citizens aged between 35 and 59 are set to receive their vaccinations in June.

Based on the latest information, the party has published a new guide to the vaccine roll-out on social media.

Based on current information, here is a guide to the #Covid19 vaccination rollout timeline over the next three months.

Thank you to all our fantastic frontline workers who are helping to make this happen. pic.twitter.com/ulGv9F6Kyb

Fine Gael said vaccinations should be ''well advanced'' for the over 60's including high-risk patients and the over 70's during May.

For June, it expects first vaccines to be under way for 35-59-year-olds and vaccinations would be well advanced for high-risk patients.

Earlier, Minister for Health Stephen Donnelly said analysis is being done on whether those aged in their 40s could potentially get vaccinated at the same time as those in their 50s, who will have to wait for the Johnson & Johnson vaccine.

"What we are thinking through is, in several weeks' time, is there an option to begin vaccinating for example the 40-49 cohort in parallel [to the 50 to 59 year olds]?" he said.

The Department of Health is "running the numbers" on this possibility today and over the weekend.

Speaking on RTÉ's Today with Claire Byrne, Mr Donnelly said another "really positive thing" is the opening of the vaccination portal for those aged 50-59 next week.

While he said not enough Johnson & Johnson vaccines are available for that age group right now, there will be "plenty of vaccines" in the coming weeks.

The minister also said that close to 150 cases of "variants of concern" have now been identified in Ireland.

He said travellers from India must quarantine in hotels from Tuesday, but to date many travel via hubs that are already on the mandatory hotel quarantine list, including Istanbul and the UAE.

Mr Donnelly said there were "mixed views" from an ethical perspective on the idea of using EU digital green certificates domestically, such as for getting into indoor concerts if you can show you have had a negative PCR test, have been vaccinated, or have had Covid in the last six months.

"Is it fair or right to be able to say to somebody, you can't come to Electric Picnic or you can't go into the gig, whatever it may be, because you haven't been vaccinated," Mr Donnelly said.

He said it is "certainly something to be looked at" but there are "strongly held views" on both sides of the argument.

One of the elements of the certificate is verification that a person has had Covid in the last six months, which Mr Donnelly said would be "lab verified".

He said no decisions have been made yet, but he would be "very reluctant" to put the burden of Covid verification on GPs.

Donnelly dissatisfied with Coombe board response

Mr Donnelly said that it was "absolutely wrong" that relatives of some members of staff at the Coombe Hospital had received vaccines earlier this year.

An independent review into the controversy was carried out by Brian Kennedy SC.

Mr Donnelly said that while the hospital board accepted that what happened should not have happened, it did not propose any further sanctions.

"I don't share that view", he said. "It is an independent hospital, but it is fully funded by the State, and I will be engaging further with the board and the HSE on that.

"I don't think it would be appropriate for me to comment any further than that, but I'm not satisfied with the answer back from the board at this time."

Sinn Féin has said the Minister for Health should "do his homework" on whether those in their 40s could be vaccinated at the same time as those in their 50s before "flying kites".

Earlier, Stephen Donnelly said work will get under way over the weekend to examine a number of policy options and officials will be "running the numbers" on whether people aged 40-49 could be vaccinated at the same time as the older cohort, who will have to wait for the Johnson and Johnson vaccine.

Sinn Féin's Louise O'Reilly said this would be "fantastic" if it happened, adding, "the quicker the better."

But she said: "The Minister again is flying a kite, saying on a Friday the numbers are going to be worked up over the weekend. Maybe wait until the numbers have been worked up and then come up with a plan. Because that would put people's minds at rest."

She said: "It would be preferable if the Minister for Health was a bit more cautious in his announcements and did a little bit less kite flying and a little but more homework."

Ms O'Reilly said Sinn Féin welcomes the announcement made by Government around reopening, but it has concerns for those who will continue to be out of work.

She said businesses who will remain closed beyond June still do not have certainty around what supports will remain in place beyond 1 July.

"The Government says there will be no cliff-edge, but we have to hear what that means," she said.

"For those people who are going to be a little bit longer before they can get back, they need to hear from the Government now that the supports are going to continue for the duration of the pandemic and not just for the emergency or the most severe end of it." 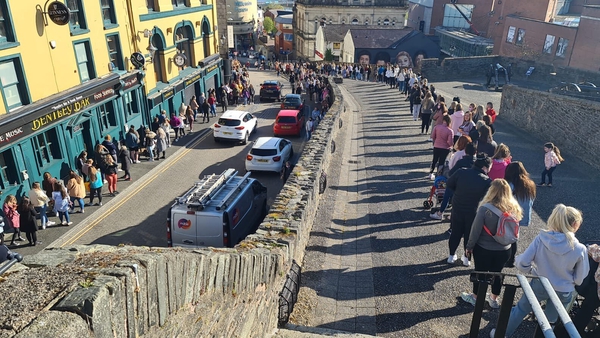