US President Joe Biden has declared the "transatlantic alliance is back" in a powerful speech seeking to re-establish the United States as leader of the West against what he called a global assault on democracy.

The address to the annual Munich Security Conference, held by video link because of the Covid-19 pandemic, dovetailed with German Chancellor Angela Merkel's welcoming of a return to "multilateralism" after the confrontational years of Mr Biden's predecessor Donald Trump.

Making his first major international address on foreign policy since becoming president in January, Joe Biden said traditional US allies should once again have confidence in Washington's leadership.

"I'm sending a clear message to the world: America is back. The transatlantic alliance is back," he said from the White House.

As vice president, I worked closely with America's democratic partners to advance our shared vision and values. As president, I’ll work with our partners and allies to defeat COVID-19 and advance peace and shared prosperity around the world.

He said: "The United States is determined, determined to reengage with Europe, to consult with you, earn back our position of trusted leadership."

Mr Biden, who earlier spoke to leaders from the G7 club of wealthy democracies, said his administration was again stressing alliance-building, in contrast to Mr Trump's isolationist policies and abrasive treatment of US partners.

"Our partnerships have endured and grown through the years because they are rooted in the richness of our shared democratic values. They're not transactional. They're not extractive," President Biden said in clear reference to Mr Trump's emphasis on redefining allies as economic rivals.

Collective strength, Mr Biden said, is the only way to succeed when a worldwide contest between democracy and autocracy is at an "inflection point".

He said: "In too many places, including in Europe and the United States, democratic progress is under assault.

"Historians will examine and write about this moment. It's an inflection point. And I believe with every ounce of my being that democracy must prevail."

President Biden said he was not seeking a return to "the rigid blocs of the Cold War," insisting that the international community must work together on issues like the coronavirus pandemic and climate change, even where deep disagreements exist on other issues.

The return of the United States, effective Friday, to the Paris climate agreement was proof of Washington's intentions, he said.

"We can no longer delay or do the bare minimum to address climate change," Mr Biden said, calling this a "global existential crisis."

But he delivered harsh warnings about the threats he said are posed by Russia and China.

Mr Biden said: "The Kremlin attacks our democracies and weaponizes corruption to try and undermine our system of governance."

He said President Vladimir Putin "seeks to weaken the European project and our NATO alliance".

Again urging Western unity, President Biden said, "it's so much easier for the Kremlin to bully and threaten individual states than to negotiate with a strong, closely united transatlantic community."

Similarly, US partners should stand together against "the Chinese government's economic abuses and coercion that undercut the foundations of the international economic system," he said.

"Chinese companies should be held to the same standard" as US and European companies facing onerous restrictions on their presence in China, he said.

Mr Biden said: "The rise of China is a defining issue for the transatlantic community with potential consequences for our security, our prosperity and our way of life."

"That is why NATO should deepen our relationships with close partners, like Australia and Japan, and forge new ones around the world."

On Iran, he reiterated his pledge to return to international negotiations with Tehran over its nuclear program, but said "we must address Iran's destabilizing activities across the Middle East."

President Biden's pivot is getting good reviews in Europe.

Speaking to reporters after the earlier G7 virtual summit, Germany's Merkel said "it is clear that multilateralism will once again have a stronger chance." 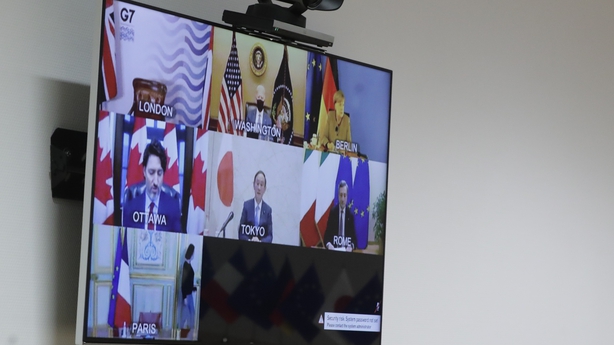 "In particular multilateralism is boosted through the change in the US government -- the Biden administration has already demonstrated this with its first decisions" on returning to the Paris climate accord as well as lending support once again to the World Health Organization, she said.

While welcoming reengagement by the US, France's President Emmanuel Macron said Europe must still step up to ensure its own security.

"If we are too dependant on the US within NATO we can put ourselves in the situation of no longer being protected at our borders," he told the Munich conference.