Poland will use AstraZeneca's Covid-19 vaccine only for people aged 18-60 following a recommendation from the country's medical council.

Europe's medicines regulator approved the vaccine developed by AstraZeneca and Oxford University for use on people over the age of 18 on Friday.

However, it said there were not yet enough results for people aged over 55 to determine how well the vaccine will work.

The news was confirmed by the Polish prime minister's top aide Mateusz Morawiecki, who is also in charge of Poland's vaccination programme

He said: "Yesterday evening, the medical council submitted recommendations regarding the AstraZeneca vaccine, on the basis of which it was decided that it will be used in Poland for people between the ages of 18 and 60."

Poland's decision follows recommendations by medical experts in Germany, Austria, France and Sweden that the vaccine should be given only to people aged between 18 and 64.

France's medical advisory body, the Haute Autorité de Santé (HAS), also approved the vaccine for those under 65.

It said the AstraZeneca vaccine shows perfectly good results in general, but more data on its efficacy in the over-65s was necessary.

The HAS, an independent body whose recommendations are usually closely followed by the French government, recommended that the vaccine be prioritised for people aged 50-65 with underlying conditions and for medical staff.

Swedish health officials also recommend that the vaccine primarily be used for those under 65, citing a lack of evidence for its efficacy among the elderly.

Meanwhile, more than 100 million Covid-19 vaccines have been given around the world, an AFP tally from official sources has found.

But none of the world's 29 poorest countries has formally started mass vaccination drives, while the richest nations have given more than two-thirds of jabs administered.

Israel leads the race by far, with 37% of its population having received at least one dose, while more than a fifth have already got their second.

Yet more than a third of humanity (35%) live in countries where vaccination has yet to begin.

After Israel, the countries that have given the most doses are in North America, Europe and the Persian Gulf.

The European Union has administered only 12.7 million shots, given to 2.3% of its people.

China by contrast has given 24 million shots, while India, where many of the vaccines are made, has given only four million to a tiny percentage of its vast population. 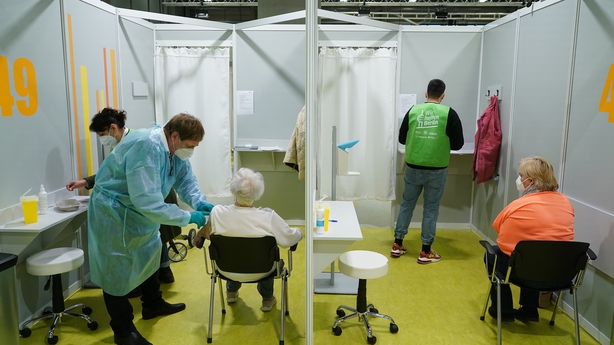 The first deliveries of the World Health Organization's Covax scheme to share shots more fairly are due begin this month. So far only Guinea has benefited, with only a few dozen given in a pilot trial.

There are currently seven vaccines circulating around the world, all designed to be given in two doses.

The vaccines developed by Pfizer-BioNTech (US-German) and Moderna (US) are dominant in North America, Europe, Israel and the Gulf.

Britain's AstraZeneca-Oxford is used in much of the UK and India, Myanmar, Sri Lanka and Morocco, and is soon to be rolled out in Europe.

China's Sinopharm jabs are being administered in China, the United Arab Emirates, Bahrain, Serbia the Seychelles and Jordan, while Indonesia and Turkey are using China's Sinovac vaccine.

China's Sinovac and Sinopharm vaccines and Russia's Sputnik V jab have yet to be fully approved by either Beijing or Moscow's health authorities.

There are 236 candidate vaccines still being developed worldwide - 63 of them in clinical trials - in countries including Germany, China, Russia, Britain and the US.

Spain's San Fermin festival, which attracts thousands of tourists from all over the world for the running of the bulls through the streets of Pamplona, has been cancelled for the second year in a row because of the coronavirus pandemic.

"An international festival like San Fermin, in which millions of people come to Navarra, won't be possible," regional leader Maria Chivite said.

As well as the morning bull runs and afternoon bullfights, the fiesta features round-the-clock singing, dancing and drinking by revellers dressed in white clothes and red neck scarves.

Last year's cancellation was the first in over four decades. The last time Pamplona did not celebrate the festival two years in a row was during the civil war in the 1930s.

In a country where Covid-19 restrictions vary from region to region, the early cancellation of the festival contrasted with the Madrid region's more relaxed approach to the pandemic, where from Friday, groups of up to six will be allowed to gather at the same table in restaurants, up from four now.

A 10pm curfew might also be pushed to midnight, where people are still allowed to eat and drink inside bars and restaurants. Theatres and museums are open in the city.

Spain's health ministry will decide this week whether or not to give AstraZeneca's recently approved Covid-19 vaccine to elderly people, Health Emergency Chief Fernando Simon said.

Several European countries including Germany, Poland and Austria have restricted the shot to younger people amid a lack of clinical data on its use in people over 65.

"It is quite possible that in the absence of evidence of possible side effects or of (the vaccine's) efficacy in these groups, it will be recommended for younger groups," Mr Simon said.

EU to continue talks with AstraZeneca

The EU has vowed to continue discussion with AstraZeneca for increasing vaccine supply following the company's promise to deliver nine million additional doses in the first quarter of this year to the EU nations, said a spokesperson for the European Commission said yesterday.

They said AstraZeneca's promise to increase its vaccine supply to the EU is constructive, but the amount is not what they expected to deliver at the end of the first quarter of this year, so the discussion will keep on.

On Sunday, the European Commission held a video conference with representatives of a number of pharmaceutical companies to discuss the rapid development and production of vaccines against the mutated new coronavirus. AstraZeneca announced in January that due to production restrictions and other issues, only 31 million doses of vaccines could be delivered to the EU in the first quarter of this year, which is much less than the promised quota of 80 million doses.

The AstraZeneca was the first vaccine producer that the EU has signed an early purchase agreement with in the effort to prevent the Covid-19 from further spread.

According to the agreement signed last August, the European Commission, on behalf of the EU states, purchased 300 million doses, with an option to buy 100 million more.

The AstraZeneca vaccine was approved for conditional marketing in the EU on Friday, after the European Medicines Agency gave a positive assessment for its safety and effectiveness.

It was the the third Covid-19 vaccine approved by the EU.