The army intervention ended a decade of transition from outright military rule in Myanmar, with the generals justifying the power grab by alleging fraud in the November elections that Ms Suu Kyi's National League for Democracy (NLD) party won in a landslide.

US President Joe Biden led the chorus of world condemnation, calling for a quick restoration of democracy and warning that Washington could reimpose sanctions.

"The international community should come together in one voice to press the Burmese military to immediately relinquish the power they have seized," Mr Biden said.

"The United States is taking note of those who stand with the people of Burma in this difficult hour." 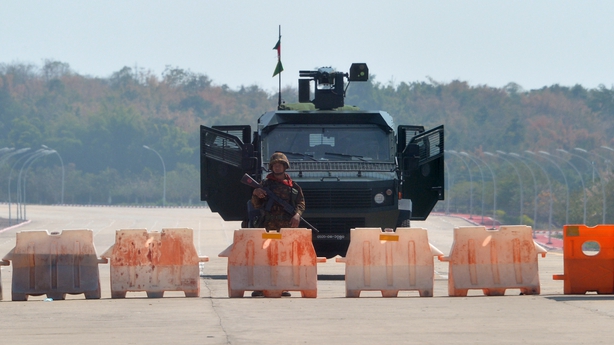 Ms Suu Kyi and President Win Myint were detained in the capital Naypyidaw before dawn, party spokesman Myo Nyunt said, just hours before parliament was meant to reconvene for the first time since the elections.

Former foreign minister Wunna Maung Lwin, who served under ex-general Thein Sein, will return to that role after five years - taking over a job that Ms Suu Kyi had held while she was de facto national leader.

The military sealed off roads around the capital with armed troops, trucks and armoured personnel carriers. Military helicopters flew across the city.

A coup had been expected for days, yet when it came it left Myanmar stunned - with roads to its main international airport blocked and communications cut - a country once more isolated from a world it only rejoined a decade ago.

"It's extremely upsetting - I don't want the coup," said a 64-year-old Burmese man in Hlaing township, standing with a crowd outside a grocery stall.

The United Nations Security Council scheduled an emergency meeting on the situation for tomorrow.

Read more:
Myanmar coup: What we know so far
Suu Kyi's fate, and Myanmar's, in the balance after army coup

The military declared, via its own television channel, a one-year state of emergency and announced that former general Myint Swe would be acting president for the next year.

It alleged "huge irregularities" in the November polls that the election commission had failed to address.

"As the situation must be resolved according to the law, a state of emergency is declared," the announcement said.

The army later pledged to hold fresh elections after one year.

Ms Suu Kyi had issued a pre-emptive statement ahead of her detention calling on people "not to accept a coup", according to a post on the official Facebook page of her party's chairperson.

The military moved quickly to stifle dissent, severely restricting the internet and mobile phone communications across the country. 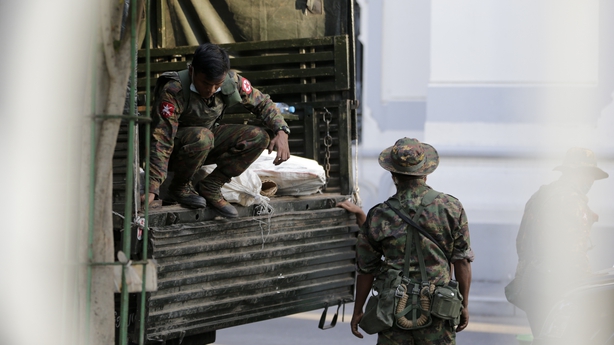 In Yangon, the former capital that remains Myanmar's commercial hub, troops seized the city hall just ahead of the announcement, according to an AFP journalist.

Several trucks were seen in Yangon carrying army supporters, with Myanmar flags and blaring nationalist songs, and some NLD members reported that security forces had ordered them to stay at home.

People rushed to grocery stores to stock up on rice, oil and instant noodles. Banks were temporarily closed by the communications freeze, but some were expected to reopen tomorrow.

Myanmar's November polls were only the second democratic elections the country had seen since it emerged from the 49-year grip of military rule in 2011.

UN Secretary-General Antonio Guterres, the European Union and Australia were among others to condemn the coup. Britain summoned Myanmar's envoy in formal protest.

China declined to criticise anyone, instead calling for all sides to "resolve differences".

The NLD won more than 80% of the vote in November - increasing its support from 2015.

But the military has for weeks complained the polls were riddled with irregularities, and claimed to have uncovered more than 10 million instances of voter fraud.

Ms Suu Kyi, 75, is an immensely popular figure in Myanmar for her opposition to the military - which earned her the Nobel Peace Prize - having spent the best part of two decades under house arrest during the previous dictatorship.

But her international image was shredded during her time in power as she defended the military-backed crackdown in 2017 against the country's Muslim Rohingya community.

About 750,000 Rohingya were forced to flee into neighbouring Bangladesh during the campaign, which UN investigators said amounted to genocide.

The Norwegian Nobel Committee said today it was "appalled" by her arrest.

Ms Suu Kyi was only ever de facto leader of Myanmar as the military had inserted a clause in the constitution that barred her from being president.

But to circumvent that clause, she assumed leadership of the country via a new role of "state counsellor".

The 2008 constitution also ensured the military would remain a significant force in government by retaining control of the interior, border and defence ministries.

"From (the military's) perspective, it has lost significant control over the political process," political analyst Soe Myint Aung said.

'The unpredictability of it, and to not know what is going to happen, is unsettling'

After military assurances a coup would not take place in Myanmar, an Irish woman living there told RTÉ News she only realised what had happened when her internet failed.

"On Saturday, we were told by a military spokesperson that a coup would not happen and then we woke up this morning without any internet connection and slowly throughout the morning came to the realisation that a coup had happened," the woman told RTÉ's News at One programme.

The Irish woman said outside Myanmar's capital people are "going about their business" but she felt apprehensive.

"The unpredictability of it, and to not know what is going to happen, is unsettling," she said.

"Things appear to be a little reserved but largely life is going on as normal away from the city centre."

"There is worry. The worst part of it is not having secure internet. Not having a connection with anyone outside your area is quite worrying because you don't know whether events have escalated or calmed and you don't know whether other people are safe or unsafe. Cutting that line of communication is very tough for people," said the woman.

The Irish woman added she is safe.

"We are far away from where action is being taken on the streets. We have stocked up as best we can. I am feeling safe but apprehensive and really wondering what is going to come next.

"We do things like making sure you have a backup of rice and food essentials," she said. 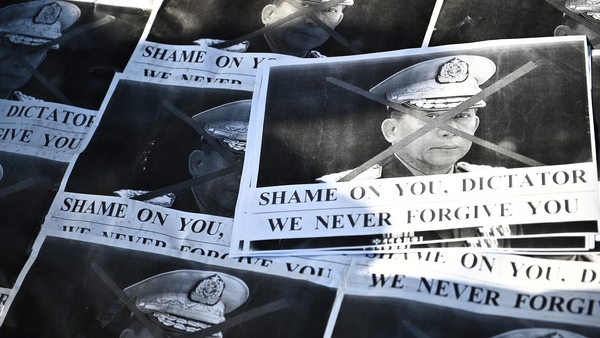 Myanmar coup: What we know so far