Police detained more than 3,000 people and used force to break up rallies around Russia today as tens of thousands of protesters demanded the release of Kremlin critic Alexei Navalny.

Mr Navalny's wife was among those detained.

Mr Navalny had called on his supporters to protest after being arrested last weekend as he returned to Russia from Germany for the first time since being poisoned with a nerve agent he says was applied to his underpants by state security agents in August.

The authorities had warned people to stay away from today's protests, saying they risked catching Covid-19 as well as prosecution and possible jail time for attending an unauthorised event.

But protesters defied the ban and bitter cold, and turned out in force.

In central Moscow, where Reuters reporters estimated at least 40,000 people had gathered in one of the biggest unauthorised rallies for years, police were seen roughly detaining people, bundling them into nearby vans. 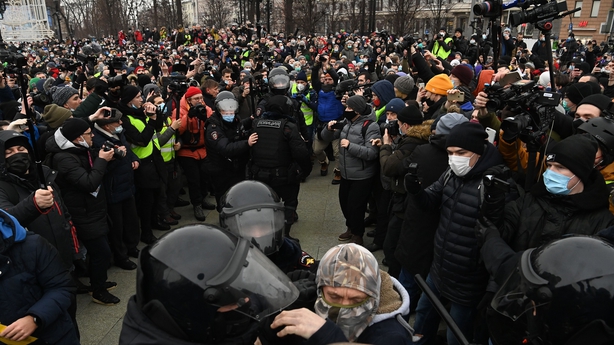 The authorities said just some 4,000 people had shown up. The foreign ministry questioned Reuters' crowd estimate, using sarcasm to suggest it was too high.

"Why not just immediately say 4 million?" it quipped on its official Telegram messenger channel.

Some protesters chanted "Putin is a thief", and "Disgrace" and "Freedom to Navalny!"

Mr Navalny's wife Yulia said on social media she had been detained at the rally. She was later released.

Some of Navalny's political allies were detained in the days before the protest; others on the day itself. 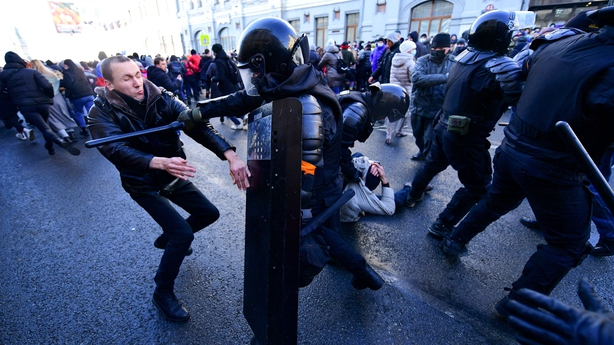 The OVD-Info protest monitor group said that at least 1,614 people, including 513 in Moscow and 212 in St Petersburg, had been detained across Russia.

It reported arrests at rallies in nearly 70 towns and cities.

Mr Navalny, a 44-year-old lawyer, is in a Moscow prison pending the outcome of four legal matters he describes as trumped up. He accuses President Vladimir Putin of ordering his attempted murder. Mr Putin has dismissed that, alleging Mr Navalny is part of a US-backed dirty tricks campaign to discredit him.

One Moscow protester, Sergei Radchenko, 53, said: "I'm tired of being afraid. I haven't just turned up for myself and Navalny, but for my son because there is no future in this country."

He added that he was frightened but felt strongly about what he called an out of control judicial system.

Video footage from Vladivostok showed riot police chasing a group of protesters down the street, while demonstrators in Khabarovsk, braving temperatures of around -14 Celsius, chanted "Shame!" and "Bandits!"

Police in the Siberian city of Yakutsk, one of the coldest cities in the world and where the temperature was -52 Celsius, grabbed a protester by his arms and legs and dragged him into a van, video footage from the scene showed.

A small protest was held outside the Russian Embassy in Dublin this afternoon, to coincide with demonstrations elsewhere.

Minister for Foreign Affairs, Simon Coveney, said he was "very concerned" about scenes of police violence and mass detentions across Russia.

Very concerned at mass detentions and scenes of police violence with peaceful protesters across Russia - EU Foreign Ministers with discuss on Monday in Brussels. ???? https://t.co/SUCyzu6o1K 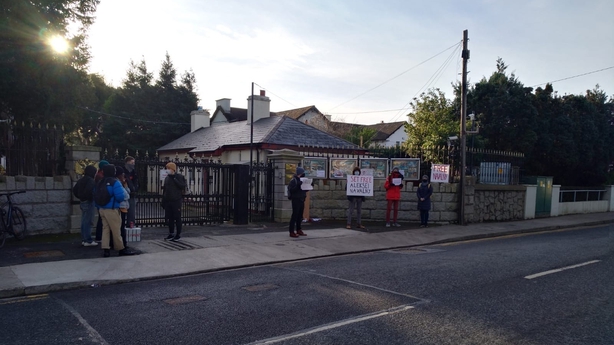 On the eve of the rallies, Mr Navalny, who is being held in Moscow's high-security Matrosskaya Tishina jail, thanked his supporters.

He said: "I know perfectly well that there are lots of good people outside of my prison's walls and help will come."

Mr Navalny's wife Yulia said she would join the protest in Moscow. "For myself, for him, for our children, for the values and the ideals that we share," she said on Instagram. 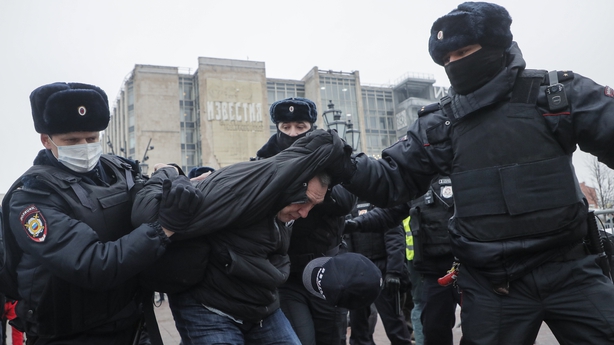 Ahead of the demonstrations several key Navalny aides were taken into police custody for violating protest laws and handed short jail sentences to keep them away from the rallies.

The Investigative Committee, which probes major crimes, said it launched a criminal probe into the calls for unauthorised protests.

A hastily organised court on Monday jailed Mr Navalny for 30 days, and his supporters fear that authorities are preparing to sentence him to a long prison term to silence him.

The "Putin's palace" report alleges the Russian leader owns a 17,691 square metre mansion that sits on a property 39 times the size of Monaco and features a casino along with a theatre and a hookah lounge complete with a pole-dancing stage.

The two-hour video report had been viewed more than 65 million times since Tuesday, becoming the Kremlin critic's most-watched YouTube investigation.

The Kremlin has denied the property belongs to Mr Putin.

Many Russians took to social media, including video-sharing app TikTok hugely popular with teens, to voice support and urge a large turnout. 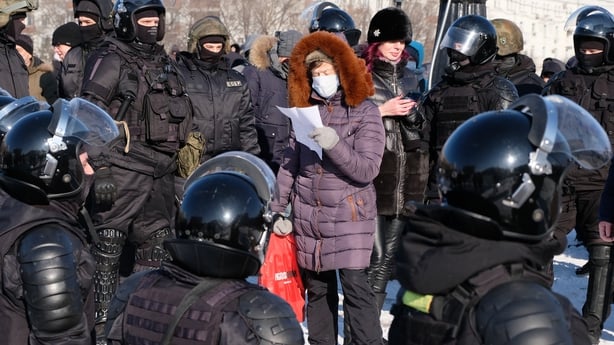 A hashtag demanding freedom for Mr Navalny was trending on TikTok as Russians flooded the Chinese app with thousands of videos.

But a number of public figures, including those who usually steer clear of politics, have spoken out in Mr Navalny's support.

Mr Navalny rose to prominence a decade ago and has become the central figure of Russia's opposition movement, leading large-scale street protests against corruption and electoral fraud.

His arrest drew widespread Western condemnation, with the United States, the European Union, France and Canada all calling for his release.