The Mother and Baby Homes Commission's report is the culmination of five years' work, but it is based on a lifetime of recollections by survivors.

It's another difficult and necessary step towards reconciliation and restitution.

But just before publication, survivors were bypassed, with some elements published in the Sunday Independent yesterday.

Although Government reports are frequently leaked, this one was particularly sensitive and it has caused tensions within the Coalition.

The newspaper story undermined promises made by Taoiseach Micheál Martin and Minister for Children Roderic O'Gorman in the aftermath of the furore over controversial legislation last year.

Survivors were heartbroken and the leaking has unleashed a furious round of finger-pointing in Government as the recriminations rebound.

One Government source said it was impossible to overstate the Minister's anger.

Mr O'Gorman has been working to rebuild trust with survivors in the aftermath of the massive controversy over last year's records legislation.

He has been reaching out to individual survivors with the aim of carefully managing the publication of this report.

The choreography includes a webinar tomorrow between the Taoiseach, the Children's Minister and survivor groups.

Crucially, this will take place before the publication, with the aim of allowing those directly impacted to hear the findings before they are released to the general public.

But with some aspects of the report already out there, Green Party TDs are also fuming, as they had borne the brunt of the anger last October when the Records Act was passing through the Dáil.

One party TD said huge importance was placed on getting the publication right and ensuring survivors were at the centre of the process.

"Members, local groups and elected groups are all annoyed at the disrespect shown to survivors - it undermined the survivor focus."

Green Party representatives were reluctant to say where exactly the leak may have emanated from, but another Government source said all the tension was between Fianna Fáil and the Green Party.

"Everyone knows the sensitivity - the number one rule is to consult with survivors." 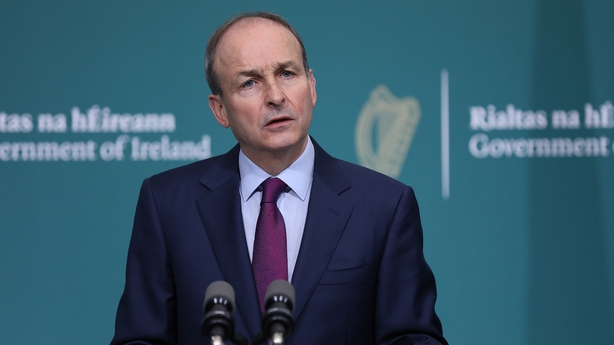 The Taoiseach said today that the leak was "regrettable" and would be addressed.

However, the fallout is deeply sensitive for his office, as the newspaper article featured direct quotes from the Taoiseach.

The Taoiseach's spokesperson issued a statement on Sunday with no direct reference to the leak itself, but said Minister O'Gorman's concerns would be discussed at Government level.

The Tánaiste, Leo Varadkar, told RTÉ Radio 1's Today with Claire Byrne that the leak was "very, very disrespectful", although he didn't agree that the inclusion of comments from the Taoiseach legitimised the leak.

Asked where it may have come from, the Tánaiste said a memo had been circulated on Friday to ministers, advisers, secretaries general and civil servants.

But he also said the Minister had told him that specific details were only contained in the report rather than the memo.

Mr O'Gorman is said to be determined to follow up on the leak and has initiated an investigation.

However, another Government source was cautious about this, saying that no inquiry has ever cast light on the source of the leak.

The matter is also likely to be raised at tomorrow's Cabinet meeting.

And the three party leaders will discuss it tonight at their usual pre-Cabinet meeting.

For all the political fallout, the aim remains to carefully manage tomorrow's publication and the State's response - including the formal apology to survivors.