The Department of Health has been notified of eight further deaths of people with Covid-19 and 6,888 new cases.

The number of people in ICU has risen to 125, up six from yesterday. There has also been 100 additional hospitalisations in the past 24 hours.

It it not clear whether tonight’s figure of 6,888 cases includes backlog cases, or is solely new cases.

Of cases notified today, 60% are under 45 years of age and the median age is 38 years old. 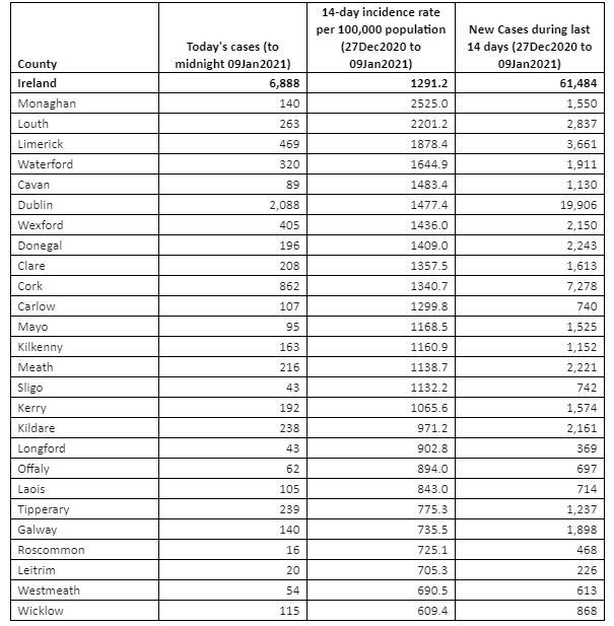 The hospital said that it has been an extremely busy weekend with a large number of patients presenting with suspected or confirmed Covid-19, "many of whom required admission".

It said that as a result there were few beds available, resulting in delays in admission for patients going to the dedicated Covid-19 zone.

Clinical teams assessed patients in the ambulances to make sure they were treated according to clinical priority.

LUH said it has secured additional staff, allowing it to open a further 11 beds to respond to this demand.

The hospital said that while there were ambulances delayed earlier in the day, they have been and continue to be released.

However, a representative of the INMO in the North-West said that up until 9pm tonight there were as many as seven ambulances still waiting outside the hospital.

In a statement, LUH has apologised to patients for the distress that these delays cause and acknowledged the huge effort of its staff.

Neal Donohue, INMO Industrial relations officer, told RTÉ News that the emergency department at LUH was full and that one ward containing 20 beds was also closed due to staffing shortages.

Mr Donohue said he is "exceptionally concerned" about the situation and that the INMO have asked the hospital to invoke an emergency plan.

He said this would involve taking "more urgent and drastic measures to support the hospital", including diverting patients away from LUH.

He said that in recent weeks, at least 50 nursing and midwife staff have been absent from work because they have either contracted Covid-19 or are a close contact of someone who has it.