Snowstorms in Spain left three people dead and caused chaos across much of the country, trapping motorists and shutting down Madrid's air and rail links, with more expected.

Yesterday, Madrid experienced its heaviest snowfalls since 1971 in what the AEMET weather agency described as "exceptional and most likely historic" conditions caused by Storm Filomena.

Following a chaotic 36 hours, the snowfall began moving off towards the northeast from central Spain this evening. Interior Minister Fernando Grande-Marlaska said: "Even if, despite the extremely difficult weather conditions, the number of incidents is relatively limited, we have three deaths to mourn."

One man was found dead under a snowdrift in Zarzalejo, northwest of Madrid, while two others died trying to cross a swollen river in Mijas, near Malaga.

Mr Grande-Marlaska added however that the national programme to vaccinate people against the coronavirus would continue next week.

Security forces would do all they could to ensure the snow did not affect measures to stem the epidemic, "nor the vaccination campaign", the minister said.

Health and interior ministry officials would consult tomorrow to oversee "the transfer, stocking and distribution of new Pfizer vaccine doses that arrive Monday in Spain", he added.

Apart from Madrid, the exceptional conditions put another four regions in the centre of the country on red alert, including Aragon, Valencia, Castilla La Mancha and Catalonia.

On Twitter, Prime Minister Pedro Sanchez called on people to stay indoors and follow the instructions of the emergency services. He paid tribute to the work of the rescue agencies who had helped hundreds of people trapped in the snow overnight. 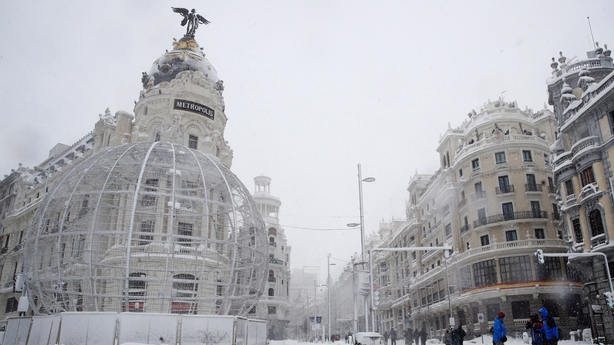 Also on the social network, the Spanish king and queen expressed "pain" and "concern" for the public.

Madrid's Barajas airport was shut down late yesterday and the snowfall disrupted traffic on nearly 400 roads, according to transport officials. The Renfe rail network, meanwhile, said all trains to and from Madrid had been cancelled.

Mr Grande-Marlaska said emergency services and army snow ploughs had freed all 2,500 drivers stuck on Spain's roads by the snowstorm.

He said: "We are working to clear access to hospitals as quickly as possible.

"But frankly that is complicated, it has been snowing so much."

The army arrived yesterday to help the authorities, he added.

Schools and universities in and around Madrid will be closed Monday and Tuesday, said the president of the region Isabel Diaz Ayuso. 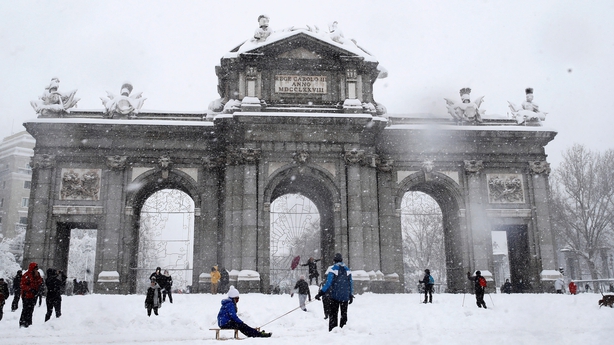 And a football match in Bilbao pitting Atletico Madrid against Elche-Getafe has been postponed indefinitely.

In all, 36 out of Spain's 50 provinces declared snow alerts.

Catalonia in the southeast and Castilla La Mancha have both banned heavy goods vehicles from driving in the wintry conditions.

The historic city of Toledo asked the army for help clearing the streets, as did Albacete in the southeast, public television reported.