Pope Francis will deliver his Christmas Day message indoors due to coronavirus restrictions, the Vatican has said, as two cardinals close to the pontiff tested positive for Covid-19.

The pope traditionally gives his "Urbi and Orbi" (To the City and The World) message from the balcony of St Peter's Basilica on 25 December.

But this year Italy has imposed tough new restrictions over the Christmas and New Year period to stem the spread of coronavirus.

As a result, the Vatican said: "Pope Francis will deliver the Christmas message and impart the blessing 'Urbi et Orbi' in the Hall of Blessings in the Vatican Apostolic Palace."

On 26 and 27 December and 1, 3 and 6 January, the recitation of the Angelus prayer will take place in the library.

Christmas Eve mass on 24 December had already been brought forward to allow the faithful to get home by Italy's 10pm curfew.

The news came as Vatican sources said two cardinals in the pope's entourage were confirmed to have coronavirus.

The Polish cardinal Konrad Krajewski, who is in charge of the pope's charities, "tested positive for Covid-19", Vatican spokesman Matteo Bruni said.

The 57-year-old, known as "Robin Hood" for his work with the poor and the homeless, had symptoms of pneumonia and is currently under surveillance in a hospital in Rome.

Officials are still seeking to identify his recent contacts, but he is known to meet the pope regularly.

Italian cardinal Giuseppe Bertello, 78, the president of the governorate, effectively the chief executive, of the tiny state of Vatican City has also tested positive, a Vatican source told AFP.

The 84-year-old pope, known for his love of getting close to the faithful, has been reluctant to wear a mask despite the pandemic that has hit Italy particularly badly. 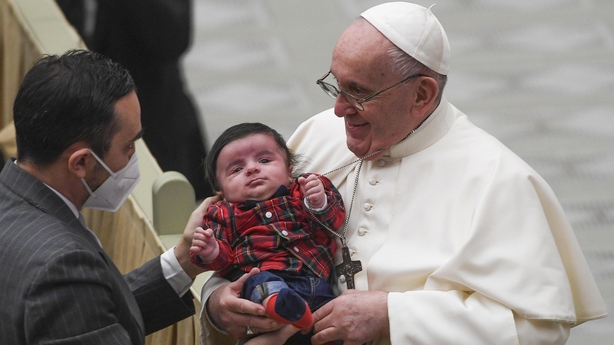 During a meeting with Vatican employees yesterday, the pontiff and his entourage without masks, could not resist having a cuddle with a baby.

The Argentine is considered particularly at risk of complications if he contracts coronavirus, both because of his age and his history of lung problems.

He almost died when he was 21 after developing pleurisy, and had part of one of his lungs removed, according to biographer Austen Ivereigh.

In a recent book, "Let Us Dream", the pope described how he fought for his life during the illness in 1957, when he was in his second year of training for the priesthood in Buenos Aires.

"I have some sense of how people with coronavirus feel as they struggle to breathe on ventilators," the pontiff wrote.