The Minister for Foreign Affairs said a Joe Biden presidency may make some difference to Brexit negotiations, adding that the US president-elect is a "real friend to Ireland" and supporter of the Good Friday Agreement.

Simon Coveney said the US and UK are close allies but the fact that Mr Biden will be the next US president may give Downing Street "pause for thought" to ensure Irish issues are prioritised as efforts are made to close out this phase of Brexit negotiations.

It comes as British Prime Minister Boris Johnson is set to proceed with his controversial Brexit bill despite US president-elect Joe Biden having previously warned the UK over the draft legislation.

Mr Biden, who has Irish heritage, warned last September that the Good Friday Agreement cannot be "a casualty of Brexit" and said a UK-US trade deal would be dependent on the peace terms being upheld.

After congratulating Mr Biden and vice president-elect Kamala Harris on their victory, Mr Johnson told broadcasters he intended to push ahead with the Internal Market Bill, with peers due to vote on it this week.

The bill would override clauses in the Withdrawal Agreement relating to Northern Ireland and the British government has admitted it breaks international law.

Simon Coveney told RTÉ's Morning Ireland that if international treaties "are going to be broken by the UK" in the context of its Internal Market Bill, that would make agreement in lots of other areas "a lot more difficult" between the EU and the UK.

He said this is arguably "the most important week we have had in the Brexit trade negotiations since this time last year" when efforts were being made to close a withdrawal agreement.

Mr Coveney said "we are really in the endgame now" and big efforts will be made this week to "close this out in a way that both sides can live with".

Minister @Simoncoveney describes US president-elect Joe Biden as 'a real friend of Ireland', saying he took time out of his election campaign to make a 'clear statement' about the need to protect the Good Friday Agreement | Read more: https://t.co/Gf6nKbGU78 pic.twitter.com/lMm5oDbN5K

Big issues remain, which include trying to find agreement on what the EU calls a level playing field and fishing.

Mr Coveney said "we all want to see the back" of tense stand-offs linked to Brexit in the coming months and years. "We want to see Ireland, the EU and the UK working together in partnership in many areas and with the new incoming administration."

He agreed with the former EU ambassador to the US, David O'Sullivan, that a new transatlantic deal between Europe and US is needed and said it is something he has argued for.

Minister for Foreign Affairs @Simoncoveney says there may be 'pause for thought' in the UK about Brexit negotiations 'now that Joe Biden is going to be the next President of the United States' | Read more: https://t.co/Gf6nKbGU78 pic.twitter.com/BOHC5uT8bK

It makes absolute sense, in his view, he said, that the EU and the US would be talking to each other seriously about creating a trade partnership and that the UK should also be involved in that discussion.

The minister added that a Biden presidency creates new opportunities like that, which will result in less division in terms of international politics and hopefully more partnership from like-minded countries.

Speaking to BBC's Westminster Hour, he warned Boris Johnson about the way Brexit would be viewed through an Irish lens in future in the Oval Office.

"Joe Biden is immensely proud of his Irish roots - he did it publicly in his speech (after being announced president-elect), he does it privately as well, quotes Seamus Heaney at the drop of a hat," he said.

He told Sky there was "goodwill on both sides" to progress towards a Brexit trade deal. 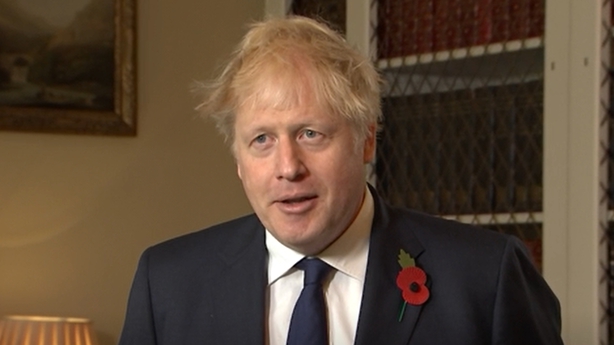 "The whole point of that bill, and indeed the Finance Bill, is to protect and uphold the Good Friday Agreement and the peace process in Northern Ireland.

"And again, that's one of the things that we're united on with our friends in the White House."

Last week, the UK breached the deadline for responding to legal action by the European Commission over the Internal Market Bill.

A "reasoned opinion" is the next stage in the infringement procedure taken by the EU.

EU chief negotiator Michel Barnier arrived in the English capital late last night before another week of talks with his UK counterpart David Frost, as they scramble to find an agreement within weeks.

Britain formally left the EU in January but remains bound by most of its rules and regulations until the end of the year under the terms of its divorce.

Important week ahead on #Brexit - @MichelBarnier outlining, from an EU perspective, what's needed for a deal!
Let’s hope we can get it done & move beyond the political tension & standoffs of Brexit - we all want to move on to a better place. 🇮🇪🇪🇺🇬🇧🇺🇸 https://t.co/um4BRBssOg

Parliaments on both sides of the Channel need time to ratify any deal struck, leaving scant time for London and Brussels to find a compromise on key outstanding issues.

These include agreeing rules for competition between British and European companies and fishing rights and access.

The question of who is US president has no bearing on the Brexit trade talks, a spokesman for the European Commission said on today.