The Irish Road Haulage Association is warning trade will be "severely upset" because of Brexit and the price of some goods could double in price.

President of the Irish Road Haulage Association Eugene Drennan said there could be a delay in delivering some goods and scarcity of products, which would not be acceptable.

He told RTÉ's Morning Ireland that any hiccup with the landbridge through Britain could create havoc, resulting in thousands of trucks "stacking" on the M20 motorway before Dover.

Mr Drennan most Irish imports and exports to continental Europe still use this landbridge but this will have to change if there is chaos in the UK.

He called for a daily, fast, efficient service into northern France ports.

Northern Ireland Policy Manager with the British Road Haulage Association John Martin said the road haulage association in the UK has been lobbying from day one, calling for clarity to be provided in a timely manner to allow companies time to implement their systems procedures.

Mr Martin said the government has failed to deliver a smooth ending of the transition period, despite this extensive lobbying.

He told Morning Ireland that no one knows the detail of the Northern Ireland protocol. Mr Martin said it is a finely balanced industry, particularly for fresh products such as vegetables.

The sector and businesses cannot afford, he said, two days sitting in a car park in Kent.

Independent TD Verona Murphy said the UK is using the landbridge from the UK to Europe as leverage to 'strengthen its arm' in negotiations on post-Brexit trade with the EU.

Speaking on RTÉ's Today with Claire Byrne show, Ms Murphy said the Government must intervene now to safeguard trade from Ireland and implement a daily direct ferry service immediately from Dublin and Rosslare to mainland Europe.

She said an alternative route to Europe would circumvent the risk of delays and costs that are likely to arise in crossings from the UK post-Brexit.

Meanwjile, the UK's Road Haulage Association has said requiring hauliers to obtain special permits to enter Kent from neighbouring counties will be "pointless".

British Cabinet Minister Michael Gove told the Commons yesterday that the permits could help avoid queues of up to 7,000 trucks seeking to cross the English Channel after the UK leaves the single market and customs union at the end of the year. 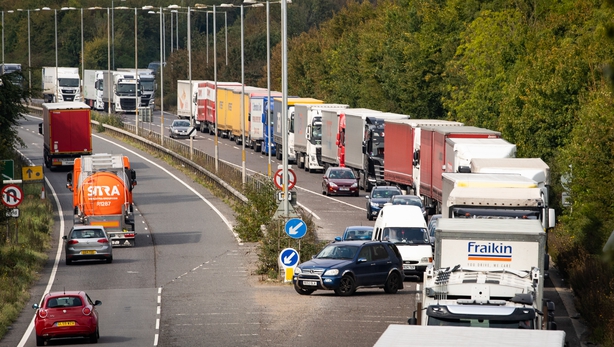 The Kent Access Permit (KAP) system could be enforced by police or the use of cameras monitoring the number plates of vehicles entering the county at points such as the Dartford Crossing bringing freight from Essex.

But Mr Buchanan said he was involved in a recent test of the system which indicated that KAPs will be issued to all lorry drivers who claim their paperwork is in order, without any checks carried out.

He told the PA news agency: "It's an honesty box system. It's not an effective system to actually guarantee or ensure that someone is ready to cross the border.

"It doesn't do that. It is just a logging system for someone to say 'I am going to the port and I promise I'm ready'.

"It doesn't really do much more than that."

He added: "It's not asking for reference numbers or anything like that. It is super basic. Thankfully the bureaucracy involved is negligible, but the function is also negligible.

"The entire system is pointless and probably counterproductive."

Mr Buchanan said ministers "should be focusing" on completing the new Goods Vehicle Movement System, which is being developed by the UK's Revenue and Customs to enable goods to be declared before they reach the border.

"That's not going to be ready for January 1, that's already been made public," he explained. "That is the system that we actually need to be up running and working to make sure that the border can operate and function properly."

Mr Gove, the minister responsible for preparing the UK for leaving the European Union's economic structures, set out the KAP system as he outlined "reasonable worst-case scenarios" that could emerge from January 1.

A lack of preparation for the end of the transition period could result in as many as 70% of lorries being turned back from France, with thousands of goods vehicles waiting up to 48 hours to reach Dover as a result of the chaos.

Mr Gove said: "We want to make sure that people use a relatively simple process in order to get what will become known as a Kent Access Permit, which means that they can then proceed smoothly through Kent because they do have the material required."

If they do not have a permit, Mr Gove said that through "policing, ANPR (automatic number-plate recognition) cameras and other means" the UK government would do its "very best" to ensure people in Kent are not inconvenienced.

Downing Street warned time was running out to reach a post-Brexit trade deal which could be in place by the end of the year.