The occupation of the Debenhams department store at Patrick Street in Cork has ended.

Eight people, including former staff from there and from the stores at Mahon Point in Cork and Tralee in Co Kerry, who occupied the store on Tuesday morning left voluntarily via a side entrance just before 1pm.

They say they are now calling on their trade union Mandate to engage with the joint liquidators from KPMG and with the Government to get talks going on a resolution of their demands.

They say they will consider further action if a resolution is not found.

Former workers have been protesting outside Debenhams stores around the country for the past 154 days. 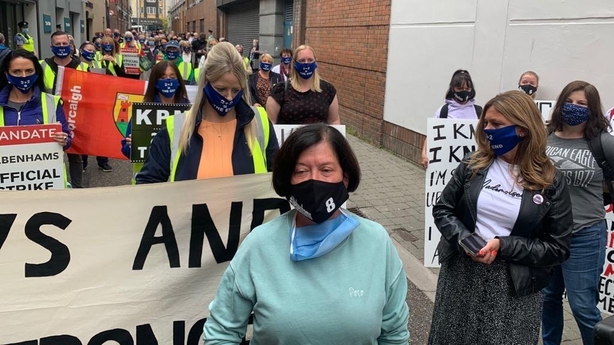 The liquidator of Debenhams, KPMG, has said the pickets by former employees in pursuit of enhanced redundancy terms are reducing the assets for creditors by hundreds of thousands of euro per month.

One of the protesters leaving the store Valerie Conlon denied this: "He has been saying that from the very beginning.

"The fault is on his side, because he knew exactly what was happening and he didn't do anything to address what we were looking for."

Joint liquidator Andrew O'Leary has also declined to rule out court action in a bid to remove stock, which has been blocked in stores by the pickets since April.

Mr O'Leary acknowledged the plight of the 1,000 workers who lost their jobs when Debenhams Ireland went into liquidation.

However, he said that after over 150 days of protests, the costs the liquidators were incurring by keeping stock in stores and not progressing the realisation of assets was running into hundreds of thousands of euro per month.

He described this as a very difficult situation "because the return to the taxpayer, which was already less than 100%, is being depleted every week."

The former workers who ended their sit-in in Cork today said in a statement that the protest had highlighted the "injustice done to Debenhams workers" and that the sit-in was not the end but "is the start of the Debenhams workers showing what happens when our patience runs thin".

Amy Hourigan who travelled from Tralee to join the sit-in said that the picketing "won't stop and court injunctions do not scare the Debenhams workers".

Valerie Conlon, shop steward at the Patrick Street store called for the Irish Congress of Unions "to break their silence and to start actively supporting the Debenhams workers".

Carol Ann Bridgeman, shop steward at Mahon Point said that the Government "must instruct the liquidator to put sufficient money aside from the sale of the stock to meet the demands of the workers".

"We won't accept any more messing around," she said.

Solidarity TD Mick Barry has said threats of court injunctions against the former Debenhams employees should be withdrawn immediately.

The Cork North Central TD said: "KPMG know full well that pickets will not be lifted in the absence of a just settlement.

"KPMG also know that court injunctions will not succeed in frightening off the pickets. What the liquidator is really doing here is to threaten these workers with the possibility of being jailed."