US Republicans launched their national convention with a full-throated endorsement of President Donald Trump's record in office.

They also laid out a bleak vision of how American life would change for the worse under a Joe Biden administration.

Mr Trump, having claimed the party's unanimous nomination earlier in the day as he opened his bid for a second term, was portrayed as a president whose response to the coronavirus pandemic saved thousands of lives and ensured an economic recovery.

His son Don Jr, who like many spoke from an ornate theatre in Washington, channeled his father's pugilistic style by framing the November election as a choice between "church, work and school" and "rioting, looting and vandalism". 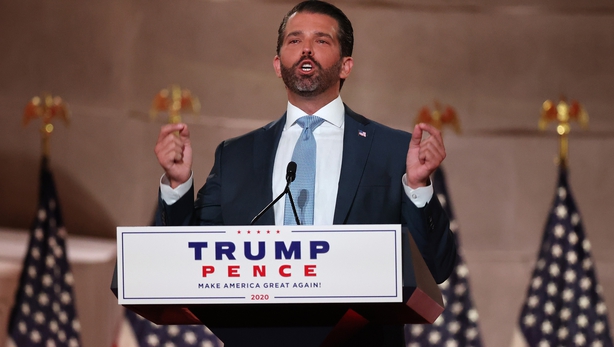 Mr Trump Jr, and nearly all other convention speakers, made no mention of the 177,000 Americans killed by Covid-19, saying his father "quickly took action" to thwart the pandemic's spread.

"There is more work to do, but there is light at the end of the tunnel," he said.

But there was also a stream of dire warnings from participants who said Mr Biden would bring "socialism" and danger to the nation.

"No matter where you live, your family will not be safe in the radical Democrats' America," said Patricia McCloskey, who with her husband made headlines in June by brandishing guns at Black Lives Matter protesters marching past their St Louis home.

Mr Trump himself meanwhile doubled down on an increasingly familiar argument: that Democrats want to "steal" the election that polls currently show him losing.

Minutes after the party completed the nomination vote confirming Mr Trump as the candidate for 3 November, he appeared at the convention in Charlotte, North Carolina, to deliver an often dark speech.

He told Republicans to be on alert for what he claimed was a Democratic plan to rig the contest through increased use of mail-in voting, a measure Democrats say is needed to protect people from catching Covid-19 in crowded polling stations.

"They are trying to steal the election," he told party delegates, many of whom were wearing masks.

"The only way they can take this election away from us is if this is a rigged election." 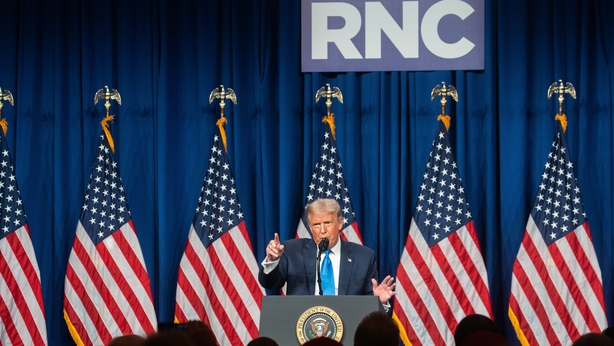 Opponents say Mr Trump's increasingly extreme resistance to expanded mail-in voting, a method already used widely in the US, is an attempt to suppress voter turnout, while setting up an excuse to challenge the result if he is defeated.

The polls show Mr Trump trailing Democratic challenger Mr Biden, who had his convention last week, as Americans turn on the president's handling of the pandemic and subsequent economic chaos.

Mr Trump hopes the convention, which concludes on Thursday with his formal acceptance of the nomination, will shift voters' attention from the coronavirus to what he says is the "super V" shaped economic recovery.

She fuelled the fear of a Democratic takeover, telling the convention that workers "now face the terrifying prospect of Joe Biden coming after everything we've built".

In the US, Republicans have held the first night of their virtual convention in support of US President Donald Trump's bid for a second term. Delegates strongly defended Mr Trump's handling of the coronavirus crisis | More: https://t.co/COhxavpVME pic.twitter.com/1l6xa0wfYr

While incumbents usually keep away from their party conventions until the final night, Mr Trump immediately took over the event in Charlotte, which had been drastically scaled back due to virus precautions.

Mr Trump is expected to make more live television appearances on each of the four days ahead of his acceptance speech at the White House.

His daughter Ivanka is also set to speak, while First Lady Melania Trump addresses the nation from the Rose Garden of the White House tonight.