Democratic candidate Joe Biden is poised to make the most important speech of his long political career tonight as he accepts the party's nomination to take on Republican Donald Trump in November's presidential election in the United States.

The poll is taking place under the grim shadow of an unprecedented health and economic crisis.

"We can't go back to the way things were before these crises, because things weren't working for far too many Americans," Mr Biden said in a tweet ahead of his primetime television speech wrapping up the Democratic convention.

"Tonight, we'll discuss our plans to build back better and set this nation on a new path," the 77-year-old former vice president and long-time senator from Delaware said.

Because of the coronavirus pandemic, Mr Biden will deliver his remarks to a live audience consisting of only a few reporters, aides and family in his hometown of Wilmington, Delaware.

The story of this campaign has had its ups and downs, but through its course we've brought our party and nation together. Now, it’s time for the final chapter.

His acceptance speech will be the final act in a convention that was to have been held in the battleground state of Wisconsin, but ended up being almost entirely online because of the Covid-19 outbreak.

In a bid to draw attention away from Joe Biden, President Trump is scheduled to deliver remarks tonight in Old Forge, Pennsylvania, a town near Mr Biden's birthplace of Scranton.

Pennsylvania, like Wisconsin, is one of a handful of states seen as crucial to Trump's and Biden's hopes of victory on 3 November.

In a show of unity, other speakers on the convention's final day include politicians who challenged Mr Biden for the nomination. 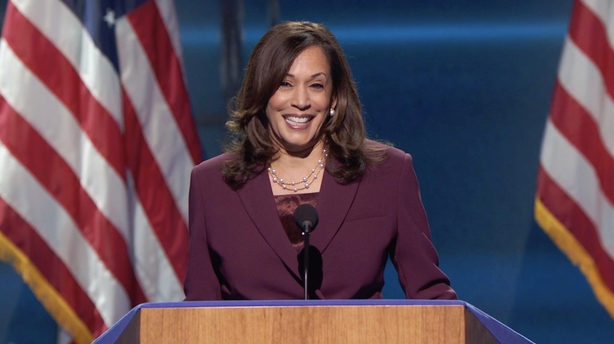 Yesterday, California Senator Kamala Harris made history as she accepted the nomination to be Joe Biden's running mate watched by an estimated 22.8 million viewers.

We travelled the train route that @JoeBiden took every day for 36 years from Washington to Wilmington & spoke to voters ahead of his acceptance speech tonight at the @DemConvention. Here's our report for @rtenews. #DemConvention pic.twitter.com/QIMiFZfBNh

Ms Harris accused Mr Trump of turning "our tragedies into political weapons" and urged Americans to vote for Mr Biden, "a president who will bring all of us together."

"Donald Trump's failure of leadership has cost lives and livelihoods," she said. "We're at an inflection point."

Shortly before Ms Harris spoke, Mr Obama delivered his own condemnation of President Trump and appealed for voters to choose Mr Biden, who is making his third run at the Oval Office.

"Tonight, I am asking you to believe in Joe and Kamala's ability to lead this country out of dark times and build it back better," Mr Obama said.

President Trump has left America's "worst impulses unleashed, our proud reputation around the world badly diminished, and our democratic institutions threatened like never before," he told the convention. 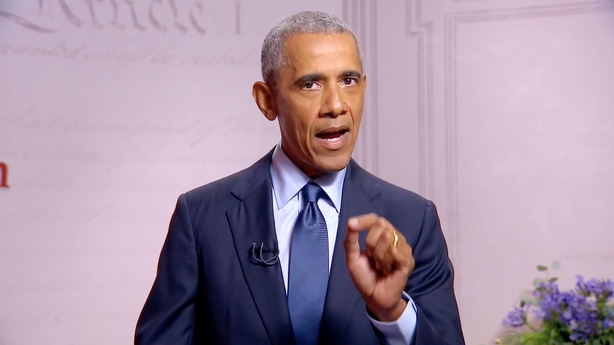 Donald Trump responded by telling reporters that Barack Obama had been "a terrible president".

Ms Harris accepted her historic vice presidential nomination after being introduced by three of her closest female relatives, a symbol of the central role women have played in her trailblazing life and could have in November's election.

These were her younger sister Maya Harris, niece Meena Harris and Ella Emhoff, the daughter of Harris's husband Douglas Emhoff, whom she married in 2014 - he has just taken a sabbatical to support his wife's campaign.

Known as "Momala" to her two step-children, Ms Harris was speaking on the 100th anniversary of the 19th amendment which gave American women the right to vote.

"These women inspired us to pick up the torch, and fight on," she said.

Ms Harris has repeatedly stressed she puts family first, and for her, the woman whose shoulders she stands on is her late mother Shyamala, a highly respected cancer researcher who emigrated from India.

Shyamala met her future husband - Ms Harris's Jamaican-born father - while demonstrating for civil rights on the streets of Berkeley, California.

"Oh, how I wish she were here tonight, but I know she's looking down on me from above," Ms Harris said.

When Ms Harris's mother gave birth to her in Oakland, "she probably could have never imagined that I would be standing before you now, speaking these words: I accept your nomination for vice president of the United States of America."

Joe Biden: A long journey to the Democratic nomination

The Republican Party is to hold its virtual convention next week and nominate Donald Trump to serve four more years as president.

He has chosen the White House South Lawn as the location for his acceptance speech - a controversial decision given that presidents are legally required to separate their campaigning from US taxpayer-funded governing.