Three people have died after a train derailed in Aberdeenshire amid heavy rain and flooding, British Transport Police have said.

Six people have been taken to hospital, although their injuries are not believed to be life threatening.

Dozens of emergency service vehicles went to the scene near Stonehaven where the ScotRail train crashed at about 9.40am today.

The train involved was the 06.38 Aberdeen to Stonehaven, made up of a locomotive and four carriages. It's understood 12 people were on board - six passengers and six staff.

The locomotive and three carriages are believed to have derailed and slid down an embankment.

Unions have called the crash a "tragedy" as a major incident was declared at Aberdeen Royal Infirmary.

Aerial footage shows the scene of a train derailment in Scotland that has led to at least three deaths | Read more: https://t.co/fppT7az3Fp pic.twitter.com/P21TpEMfys 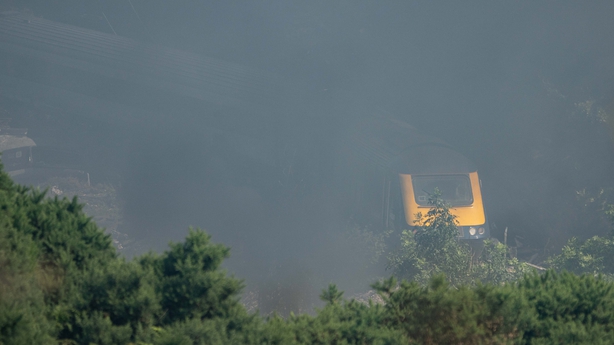 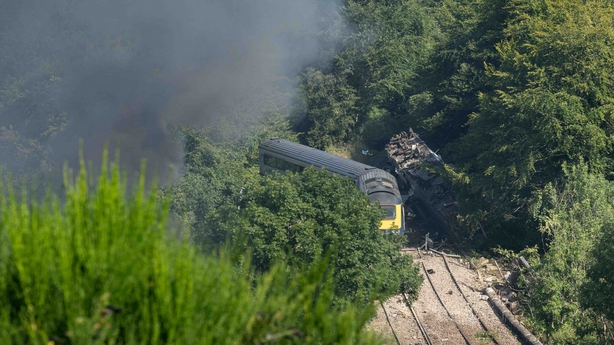 Chief Superintendent Eddie Wylie of BTP said: "This is a tragic incident and first and foremost our thoughts are with the families and friends of those who have very sadly died this morning.

"We remain on scene alongside our emergency service colleagues, and a major incident operation has been under way.

"I would like to reassure the public that this was not a busy service, and from CCTV enquiries and witness statements we believe all passengers have been accounted for. However, once the area has been made safe then a full and thorough search will be conducted, which is likely to take some time.

"I know many people will understandably have questions, and we will be working closely alongside the Rail Accident Investigation Branch and the Office of Rail and Road to establish the full circumstances of how the train came to derail."

BTP said that while formal identification is yet to take place, the driver of the train is believed to be among the fatalities.

The HM Chief Inspector of Railways, Ian Prosser, said he is "deeply saddened" by today's incident.

"ORR inspectors are on site at Stonehaven, assisting in the preliminary investigation", he said. "We will work with other agencies, including the emergency services, to find out exactly what happened and identify the cause of this tragic incident."

Britain's transport secretary Grant Shapps has said he will visit the scene on Thursday.

"I will be going there tomorrow to understand the situation first hand and offer every possible assistance," he told the BBC.

British Prime Minister Boris Johnson tweeted to say that he is "saddened" to learn of the incident and his "thoughts are with all of those affected".

Scotland's First Minister, Nicola Sturgeon, described this morning's events as "tragic" and said her "deepest condolences" are will the loved ones of those who lost their lives.

My deepest condolences are with the loved ones of those who lost their lives in this tragic incident.
I have just been updated by Network Rail and the emergency services on the ongoing operation. My thanks go to them, and my thoughts remain with everyone affected. https://t.co/L73rZTeRFu

Local MP Andrew Bowie said he had spoken to the UK's Transport Secretary Grant Shapps, who is liaising with Network Rail Scotland and ScotRail about the derailment.

He told PA: "It's obviously a terrible situation, a train derailment, the emergency services are on the scene."

Video footage posted on social media by Network Rail Scotland earlier today showed a landslip on the track at Carmont, believed to be close to the scene of the crash.

It is unclear whether the landslip was directly related to the derailment.

Network Rail tweeted at 9.49am: "At Carmont, we've had reports of a landslip, which means services can't operate between Dundee & Aberdeen."

At Carmont, we've had reports of a landslip, which means services can’t operate between Dundee & Aberdeen. /2 pic.twitter.com/1E29tKHFhy