The European Union has said it had agreed to buy a limited supply of the Covid-19 medicine remdesivir from US drugmaker Gilead to address the short-term needs of European patients, and hoped to be able to order more later.

The anti-viral is the only drug so far authorised in the EU to treat patients with severe symptoms of Covid-19, but nearly all available supplies have already been bought by the United States.

The EU Commission has agreed to pay €63m to buy enough doses to treat about 30,000 patients, it said in a statement.

The US signed a deal with Gilead in June for more than 500,000 courses of treatment, which accounts for most of the company's output through September.

The Commission said this batch would address "just immediate needs", and that it was already working to secure new doses from October.

Gilead appears to be selling the drug to Europe for €2,100 per patient, or $2,467, based on Reuters' calculations.

That would be slightly more than the $2,340 price set by Gilead for wealthier nations at the end of June, although exact terms of the deal have not been disclosed.

Most European countries have passed the peak of the Covid-19 pandemic but a new wave of infections in recent days has pushed countries to reintroduce restrictions.

While the number of hospitalisations is on the rise in Europe, they remain far below the height of the outbreak in March and April, when many hospitals were overwhelmed.

US biotechnology company Moderna's Covid-19 vaccine induced a robust immune response and prevented the coronavirus from replicating in the noses and lungs of monkeys, according to a study in the New England Journal of Medicine.

The fact that the vaccine prevented the virus from replicating in the nose is seen as particularly crucial in preventing it from being transmitted onward to others.

The same outcome did not occur when the vaccine being developed by AstraZeneca and Oxford University was tested on monkeys, though that vaccine did prevent the virus from entering the animals' lungs and making them very sick.

In the Moderna animal study, three groups of eight rhesus macaques received either a placebo or the vaccine at two different dose levels, 10 micrograms and 100 micrograms.

All vaccinated macaques produced high levels of neutralising antibodies that attack a part of the SARS-CoV-2 virus used to invade cells.

Notably, monkeys receiving both dose levels produced these antibodies at levels higher than those found in humans who have recovered from Covid-19.

The authors reported that the vaccine also induced the production of a different immune cell known as T-cells that may have helped boost the overall response.

A major area of concern is that vaccines under development could actually backfire by amplifying rather than suppressing the disease.

So-called vaccine-associated enhancement of respiratory disease (VAERD) has been linked to the production of a specific type of T-cell known as Th2, but these cells were not produced during the experiment, suggesting this vaccine will not backfire.

Four weeks after the monkeys received their second injection, they were exposed to the SARS-CoV-2 virus, both through the nose and directly to the lungs via a tube.

After two days, no replicating virus was detected in the lungs of seven of the eight macaques in both the low and high dose groups.

By contrast, all eight in the placebo group continued to have the virus present. 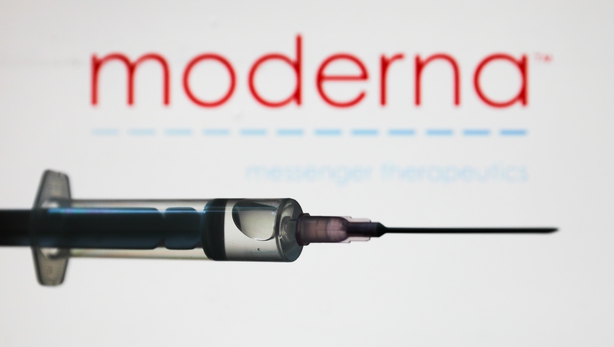 None of the eight macaques in the high dose groups had detectable levels of virus in their noses two days after exposure.

"This is the first time an experimental Covid-19 vaccine tested in non-human primates has been shown to produce such rapid viral control in the upper airway," said the National Institutes for Health, which co-developed the vaccine.

The Moderna vaccine uses genetic material in the form of viral RNA to encode the information needed to grow the SARS-CoV-2 spike protein inside the human body to trigger an immune response.

Spike proteins give coronaviruses their crown-like appearance and are used to invade human cells, but by themselves are thought to be relatively harmless.

The advantage of this technology is that it bypasses the need to manufacture viral proteins in the lab, helping to ramp up mass production.

Both Moderna's vaccine and the vaccine co-developed by the Oxford University and AstraZeneca have entered late-stage human trials.

Elsewhere, Britain has signed a supply deal for up to 60 million doses of a possible vaccine being developed by Sanofi and GlaxoSmithKline, its fourth such arrangement.