There is "no doubt" that Johnny Depp "regularly and systematically abused his wife", lawyers for The Sun newspaper have told the High Court in London, as the Hollywood star's libel case against the newspaper neared its end.

The Pirates Of The Caribbean actor has "spent his entire adult life doing exactly what he wanted" and was "not about to answer to a woman at this stage in his life", it was alleged.

Mr Depp, 57, is suing the tabloid's publisher, News Group Newspapers (NGN) and its executive editor, Dan Wootton, over a 2018 article which labelled him a "wife beater".

Mr Depp denies the allegations of violence made against him by Amber Heard, 34.

Sasha Wass QC, for NGN, told the court: "Having heard all the evidence in this case and all the supporting evidence of the incidents of violence, we suggest that there is no doubt that Mr Depp regularly and systematically abused his wife.

"The characterisation that he is a wife-beater is entirely truthful."

Ms Wass told the court Mr Depp has "spent his life surrounded by a clique of ageing, male rabble-rousers with alcohol and drugs shared together, and by the time the Hollywood star turned 50, that lifestyle had taken its toll".

"They were destroying his life, his career and his health, and he identified 'the monster' long before Ms Heard did.

"Mr Depp believed he could find himself stability with Ms Heard ... she was supportive and indicated a dedication to save him from himself and his demons, but he grew to hate her for her protectiveness.

"Mr Depp has spent his entire adult life doing exactly what he wanted, and he was not about to answer to a woman at this stage in his life."

Ms Wass described Mr Depp and Ms Heard's relationship as "a clash of cultures and clash of generations".

She added: "Ms Heard was a modern and ambitious woman. It was not in her nature to wait until he got home so she could take his boots off, and the self-scripted 'Southern gentleman' required a supplicant wife. 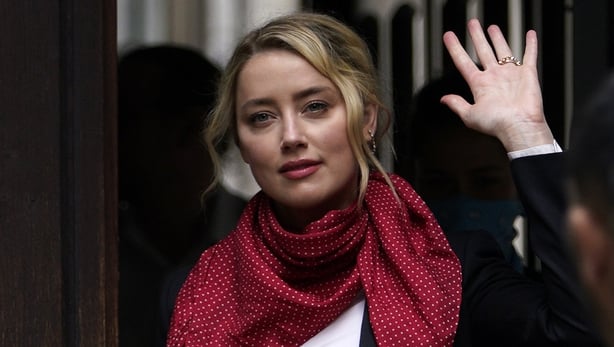 "When Mr Depp chose Ms Heard as his life partner, he did not expect her to carry on acting in films with young and attractive actors.

"Mr Depp was unable to control Ms Heard and ... it had a detrimental effect on his state of mind. It may have literally driven him back to the drink and drugs which he knew would unleash the monster."

Earlier, Ms Wass suggested that Mr Depp's memory of his "disgraceful conduct" towards Ms Heard is "so severely impaired by drug use" that he may not have been aware of the extent of his "violence and terrifying behaviour" the High Court has heard.

She said evidence of the actor's "drug and alcohol-fuelled lifestyle provides a backdrop to the events in question".

She said: "Firstly, it demonstrates that the claimant was subject to irrational mood swings and abnormal behavioural patterns, which would not have been present when Mr Depp was clean and sober, and Mr Depp has a name for this metamorphosed entity, namely 'The Monster'.

"The other aspect which is important in terms of substance abuse is Mr Depp's recollection of his own disgraceful conduct, which is so severely impaired by drug misuse that he may not even have been aware of the extent of his violence and terrifying behaviour, which, on more than one of these pleaded incidents, put Ms Heard in fear of her life."

At the outset of today's hearing Ms Wass said that the defence to the article complained about by Mr Depp is "one of truth, namely that Mr Depp did indeed beat his wife".

She said: "For the defence of truth to be substantiated, the defendants need to prove on a balance of probabilities that Mr Depp assaulted Ms Heard on at least one occasion.

"During the last two weeks, the defendants have established that many more than one incident of wife-beating took place over the course of the relationship between the claimant (Mr Depp) and Amber Heard."

Mr Depp is suing NGN and Mr Wootton over a 27 April 2018 article with the headline: "Gone Potty: How can JK Rowling be 'genuinely happy' casting wife beater Johnny Depp in the new Fantastic Beasts film?"

His lawyers say the article bore the meaning there was "overwhelming evidence" Mr Depp assaulted Ms Heard on a number of occasions and left her "in fear for her life".

NGN is defending the article as true, and says Mr Depp was "controlling and verbally and physically abusive towards Ms Heard, particularly when he was under the influence of alcohol and/or drugs".

Mr Justice Nicol has said that his judgment will be reserved.