Hong Kong is set to announce the suspension of all schools after a spike in locally transmitted coronavirus cases that has fuelled fears of a renewed community spread in the city, the South China Morning Post has reported.

The newspaper cited a medical source as saying that at least 30 more people had tested positive for the virus.

Hong Kong reported 38 newcoronavirus cases, edging down from 42 yesterday, but broadly in line with a sharp increase that the city has registered over the past three days.

Amid concerns of a renewed community spread it had reported mostly imported cases for months, authorities said 32 of the new cases were locally transmitted.

The total number of cases in the global financial hub since late January stands at 1,404. Seven people have died.

Australia will slash the number of returning citizens allowed into the country by half as it struggles to contain an outbreak of coronavirus in its second-largest city, officials announced today.

From Monday, only 4,000 Australian citizens or permanent residents will be allowed back into the country each day, down from around 8,000 currently, Prime Minister Scott Morrison said. 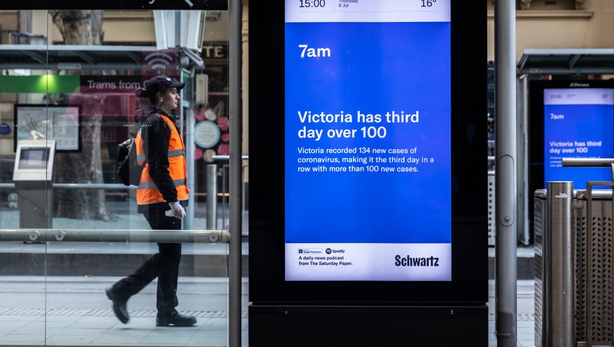 The announcement came as officials in the state of Victoria reported a record 288 new Covid-19 cases mainly in the state capital, Melbourne.

Some five million residents of greater Melbourne were ordered into a six-week lockdown this week in an effort to curb the outbreak, which has rattled a nation that had successfully contained the epidemic in most areas weeks ago.

Health authorities said it would take several weeks to know if the Melbourne lockdown has succeeded in stemming the surge.

Australia closed its international borders to all but returning citizens and permanent residents in late March as coronavirus mounted.

All returning travellers have been put in mandatory hotel quarantine, stretching resources in the country's main cities.

Mr Morrison said the cap on returning Australians would remain in place until the Melbourne epidemic is contained.

Health and security breaches in quarantine hotels in Melbourne have been blamed for sparking the outbreak there, and nationwide returning overseas travellers have accounted for the majority of Covid-19 cases in Australia.

Bolivia's interim president became the latest world leader to test positive for the coronavirus yesterday, as the United States notched yet another record-breaking surge of cases while global infections and fatalities continued their relentless rise.

Covid-19 has now claimed more than 550,000 lives across the world, and infected more than 12 million people since it first emerged in China iast December - among them Brazilian President Jair Bolsonaro, British Prime Minister Boris Johnson and now Bolivia's Jeanine Anez.

In a video on Twitter Ms Anez said she was "fine" and would continue working from isolation. Mr Bolsonaro said he was feeling "very well" yesterday after announcing he had the virus earlier this week, and Mr Johnson, who contracted the respiratory disease in March, has recovered.

Bolivia is gearing up for a general election, despite the country of 11 million recording almost 43,000 virus infections and more than 1,500 deaths.

By the time the polls are held in less than two months, the government expects there to be 130,000 cases.

The US notched up half that figure in just one day yesterday, with 65,551 new cases recorded by Baltimore-based Johns Hopkins University - a new high.

The country, the hardest-hit in the world by the pandemic, has a total case load of more than 3.1 million, with 133,195 deaths.

It has seen a spike in infections in recent weeks, and health experts worry the death rate may soon follow the same trajectory.

US President Donald Trump, who has publicly disagreed with Dr Fauci, has downplayed the spike.

"For the 1/100th time, the reason we show so many Cases, compared to other countries that haven't done nearly as well as we have, is that our TESTING is much bigger and better," he tweeted.

The virus is still infecting new populations: the first case was recorded in northwest Syria yesterday, reviving fears of disaster if the pandemic reaches the rebel bastion's displacement camps.

And the response remains chaotic in places already in the grip of outbreaks.

Some staff are so tired they have fainted or had car accidents, he said.

Meanwhile thousands of angry Serbians protested for a third day against the government's handling of the crisis - though the demonstrations remained largely peaceful after two nights of violence.

Fear and anxiety remains high for many. In South Africa, where the outbreak is yet to peak, authorities rushed to calm citizens after health officials said they were ready to bury more than a million people, with long rows of graves already dug.

And, in a potentially worrying discovery, scientists in Italy said there was "strong evidence" that Covid-19 positive mothers can pass the virus on to their unborn children.

Virus lockdowns have dealt a staggering blow to the global economy, and the outlook remained bleak yesterday.

The pandemic could push 45 million people from the middle classes into poverty in already economically troubled Latin America and the Caribbean, the United Nations warned.

European and US stocks finished mostly lower amid lingering virus worries. Another 1.3 million US workers filed for unemployment last week, government figures showed - though the pace of layoffs has slowed.

As talk of a second wave of the virus multiplies, some of the world's most populous nations including India, Pakistan and Brazil are still reeling from their first outbreaks.

In the Middle East, hard-hit Iran reported a record single-day death toll of 221, taking its total over 12,300.

In Europe, France continued to re-emerge from the darkest days, announcing the Eiffel Tower would reopen its top level for the first time in three months. Gyms and pools are set to reopen in England later this month.

However countries farther east have found themselves plunged back into restrictions with a resurgent virus, such as Bulgaria, which banned sports fans from stadiums and shut bars and clubs.

Meanwhile the World Health Organization, under fire from Mr Trump over its handling of the pandemic, opened an inquiry into its response yesterday, with initial findings due next year.

"The virus thrives on division but is thwarted when we unite," said WHO chief Tedros Adhanom Ghebreyesus, pleading for togetherness.