The "Make America Great Again" event will take place on 11 July in Portsmouth, his campaign said in a statement.

"There will be ample access to hand sanitiser and all attendees will be provided a face mask that they are strongly encouraged to wear," the rally announcement said.

Mr Trump, who is seeking re-election on 3 November, had made his grand return to the campaign trail on 20 June in Tulsa, Oklahoma.

The event quickly came under fire for flouting health measures aimed at slowing the spread of the coronavirus, such as wearing face masks or maintaining social distancing.

Images of the rally showed the stadium was filled to less than a third of its capacity, despite the president's campaign boasting of huge interest ahead of time and more than a million ticket requests.

Pictures of Mr Trump's return to the White House in the middle of the night, with a worn-out air and his tie undone, cemented the image of a flawed comeback.

With just four months left before election day, Mr Trump - criticised for his response both to the coronavirus pandemic and to anti-racism protests - has been lagging for weeks in the polls behind his Democratic rival, Joe Biden.

While there have been calls for caution in interpreting the poll results, observers have noted that Mr Biden's lead over Mr Trump is far greater than the one held by Democratic nominee Hillary Clinton at the same point in 2016.

It comes as rising coronavirus cases in 39 US states cast a shadow over the nation's 4 July celebrations as health experts worried that holiday parties will cause a further spike in infections that could overwhelm hospitals.

After towns and cities across the country cancelled annual fireworks displays to avoid large crowds gathering, many Americans launched bottle rockets and roman candles from streets and suburban backyards to commemorate Independence Day.

In the first four days of July alone, 15 states have reported record increases in new cases of Covid-19, which has infected nearly three million Americans and killed about 130,000, according to a Reuters tally.

Florida's cases have risen by over 10,000 for three out of the last four days, including climbing by 10,059 yesterday surpassing the highest daily tally reported by any European country during the height of the coronavirus outbreak there. 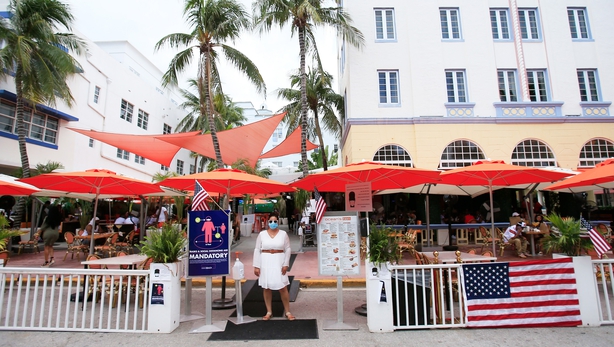 Cases are also soaring in Arizona, California and Texas and trending upwards in Midwest states that once had infections declining such as Iowa, Ohio and Michigan, according to a Reuters analysis of how much cases rose in the past two weeks compared with the prior two weeks.

In Phoenix, Arizona, people gathered on Saturday without masks or social distancing to listen to a speaker at a rally against restrictions to prevent the spread of the virus. Many in the crowd wore red, white and blue, and some held signs saying, "Capitalism makes sense. Socialism doesn't. Go Trump 2020."

"We opened way too early in Arizona," Phoenix Mayor Kate Gallego said on ABC. She said the city was in a "crisis related to testing," with people waiting in eight-hour queues in their cars to find out if they were infected.

During an Independence Day speech at the White House on Saturday, Mr Trump claimed without evidence that 99% of coronavirus cases in the United States were "totally harmless."

In Texas alone, the number of Covid-19 patients currently hospitalised rose to a record 7,890 on Saturday compared with 3,247 just two weeks ago.

The Democratic mayor of Austin, Texas, warned during an interview with CNN that his city's hospitals could reach capacity in two weeks and run out of intensive care unit beds in ten days.

Mr Trump has refused to wear a mask in public and has been reluctant to encourage Americans to do so, saying it was a personal choice. A 4 July celebration he attended at Mount Rushmore in South Dakota was "mask-optional" and had no social distancing. 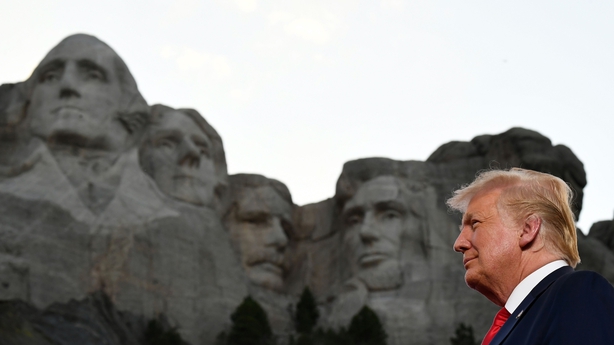 Mixed messaging from government has been a major factor in people not following coronavirus mitigation recommendations in Miami Beach, said its Democratic mayor, Dan Gelber.

Miami Beach's coronavirus hospitalisations have doubled in the last 14 days and hospitals now have 158 people on ventilators, up from 64 two weeks ago, he told CNN.

"We're spreading it because of this incredible activity, and too many people obviously are not taking seriously all of these admonishments to socially distance to wear masks," he said.

In addition to rising cases, an alarming percentage of tests are coming back positive. The World Health Organization considers a positivity rate above 5% to be cause for concern because it suggests there are more cases in the community that have yet to be uncovered.

Judge Lina Hidalgo of Harris County, a hard-hit county in Texas that includes Houston, said officials must be proactive in getting ahead of the virus and advocated a stay-at-home order.