Europe has recorded more than 2.5 million coronavirus cases since the outbreak of the pandemic, with more than half the total accounted for by Russia, Britain, Spain and Italy, according to a tally from official sources complied by AFP.

With some 2,500,091 cases including 192,158 deaths, Europe is the worst affected continent while Latin America now has the fastest growing outbreak.

The official The official figures are widely believed to comprise only a small fraction of the real number of cases and deaths.

Brazil has recorded more than a million coronavirus cases, reporting a new one-day record number of infections as the pandemic continues to surge in South America's largest country.

The health ministry said it had recorded 54,771 new infections; a jump it said was largely due to "instability" in its reporting system, which meant some states were reporting figures from multiple days.

That brought the total number of infections in Brazil to 1,032,913, with 48,954 deaths - second only to the United States worldwide.

Experts say under-testing means the real numbers are probably much higher. Despite the figures, the infection curve in Brazil is finally showing signs of flattening.

However, the country of 212 million people is one of the most worrying hotspots in the pandemic.

Since the start of June, it has registered the most new infections and deaths of any country in the world, according to an AFP count based on official figures - more than 518,000 and 19,000, respectively.

It has recorded daily death tolls of more than 1,000 on each of the past four days. Brazil has struggled to set a strategy for dealing with the pandemic.

President Jair Bolsonaro, who has famously compared the virus to a "little flu," has clashed with state and local authorities over their use of stay-at-home measures and business closures to contain it.

The far-right leader argues the economic impact of such measures risks being worse than the virus itself, and has instead pushed his health ministry to recommend chloroquine and hydroxychloroquine as treatments, despite uncertainty about the anti-malaria drugs' effectiveness against Covid-19.

Mr Bolsonaro threatened this month to quit the World Health Organization, accusing it of "ideological bias" against the drugs, and has ditched two health ministers since the start of the pandemic after clashing over policy differences.

The health minister he fired in April, Luiz Henrique Mandetta, said Brazilians have suffered because of mixed messages from the government.

"The health ministry and state governors are telling people to stay home and practice social distancing, and the president is saying and doing the opposite," he said.

A year-and-a-half into his term, Mr Bolsonaro has been weakened by the pandemic, as well as a series of investigations targeting him and his inner circle and spiraling clashes with Congress and the Supreme Court.

The World Bank meanwhile forecasts Latin America's biggest economy will shrink by a record 8% this year.

Officials in Beijing are carrying out nucleic acid tests on all food and parcel delivery personnel as they steop up efforts to rein in an outbreak of the coronavirus in the Chinese capital, state-backed Beijing News reported.

Officials have been expanding testing across the city of 20 million since a cluster of new infections linked to a food wholesale market emerged just over a week ago.

The outbreak, the first in Beijing in months, has now surpassed previous peak numbers in early February.

Testing initially focused on residential areas near the sprawling Xinfadi market and on people who worked or shopped there.

Officials are now targeting the tens of thousands of delivery personnel who regularly traverse the city, where fleets of motorised pedicabs and scooters ridden by couriers delivering parcels and food are a common sight. 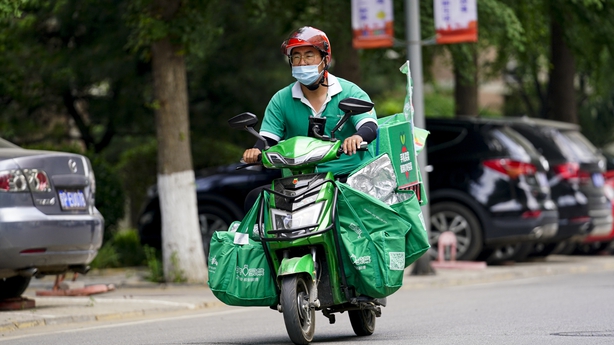 Officials have highlighted the risk of contamination through packaging in Beijing, which reported 22 new cases yesterday. The city has now recorded more than 200 locally transmitted infections since 11 June.

Officials have been testing people working in catering,including restaurant staff, as well as imported food after the virus was found on chopping boards at Xinfadi used to handle salmon.