Eleven days after Mr Floyd's death while handcuffed in the custody of Minneapolis police, President Trump said such violence cannot be allowed to happen.

He said: "Equal justice under the law must mean that every American receives equal treatment in every encounter with law enforcement regardless of race, color, gender, or creed."

And then he added, "Hopefully, George is looking down right now and saying, "This is a great thing that's happening for our country."

Mr Trump was apparently referring to a surge in employment. 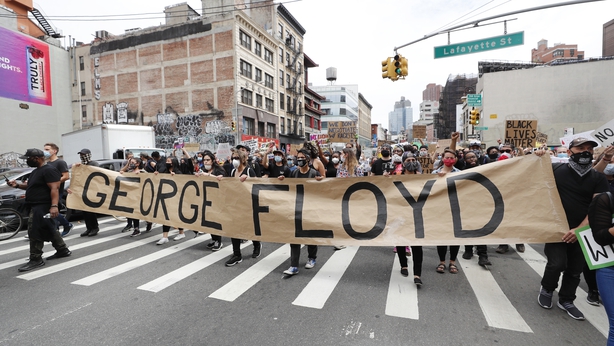 Hundreds of mourners joined an emotional memorial service in Minneapolis yesterday for Mr Floyd, as civil rights leader Al Sharpton vowed mass protests will continue until "we change the whole system of justice".

The Labour Department reported the country gained 2.5 million jobs in May and the unemployment rate dropped to 13.3% after extremely high job losses the previous months due to coronavirus lockdowns.

Mr Trump claimed his administration has done more for African-Americans than previous presidents, including lowering their unemployment rate.

Today's jobs report said, however, that unemployment for blacks rose slightly to 16.8%.

He said: "This is a great, great day in terms of equality."

"George Floyd's last words, 'I can't breathe,' have echoed across our nation and around the world," Mr Biden tweeted.

"For the President to try to put any other words in his mouth is frankly despicable."