A survey from children's charity Barnardos has found that Irish kids are missing friends and school, while also worrying for the health of their older family members during the pandemic.

Barnardos' family survey of 2,683 respondents found that 84% of children miss their friends, 68% miss school, 53% are having more difficulty with their bedtime routine, and 38% are experiencing more tantrums and outbursts.

The findings suggest that those parenting alone, and those with children under the age of ten, reported feeling the most pressure of the Covid-19 restrictions. One parent commented: "As a single parent I feel judged when leaving my house with the children." 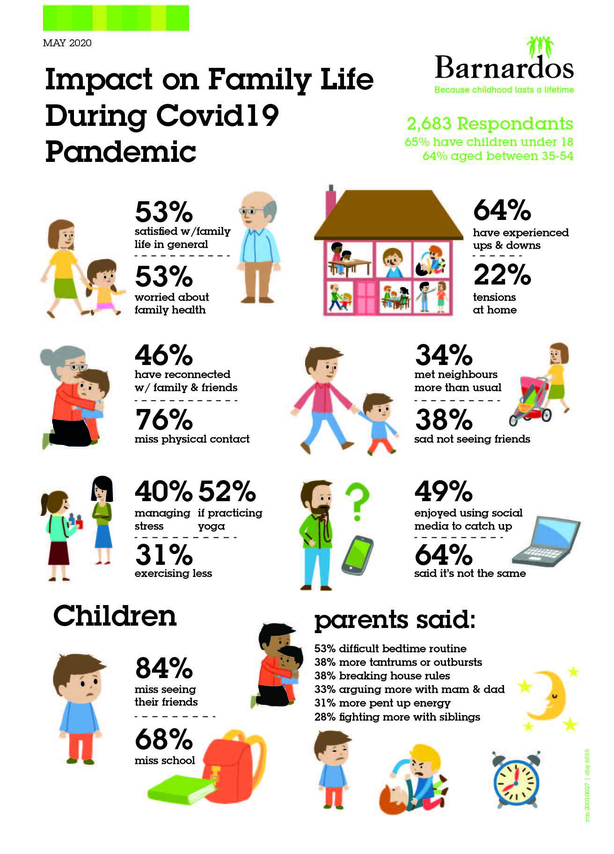 Children were reportedly more concerned about family members contracting Covid-19 than they were about themselves contracting the virus (459, 27%, compared to 277, 16%).

One respondent, a grandmother, commented: "The boys are extremely stressed… they are terrified I will be infected by them or others and will die. The total focus everywhere on the virus is really upsetting children, irrespective of their circumstances. It is adding stress.

"My grandsons wrote emails to me a week ago begging me not to go out or speak to anyone... children need reassurance at all levels."

Barnardos called on the Government to strongly consider the needs of children and parents during the phased re-opening of the country.

Barnardos CEO Suzanne Connolly said: "The lack of childcare support is a huge contributor to this stress and hundreds of respondents reported that trying to balance parenting and working at home added a lot of pressure to the household.

"However, half of families reported being satisfied or extremely satisfied with family life in general.  Some families noted how the restrictions have allowed them to stop, take stock of what is important and to spend quality time together."