The Bundesliga became the first major European football league to return to action since the coronavirus lockdown, with teams playing in empty, echoing stadiums this afternoon.

In the standout match of the day, Borussia Dortmund hosted Schalke 04 in the Ruhr derby in the cavernous Signal Iduna Park, which would normally have been packed with 82,000 spectators.

Instead no more than 300 people were in the stadium and the only sound when Norwegian forward Erling Braut Haaland scored the opening goal for Dortmund in the first half was the players' voices.

Professional football returned to western Europe earlier in the day as the second-tier Bundesliga 2 resumed with four matches.

South Korean Lee Jae-Sung scored the first league goal in over two months when he gave Holstein Kiel a third-minute lead at Regensburg.

However, the game between Hanover and Dynamo Dresden was postponed after the Dresden squad was forced to quarantine for two weeks due to two positive tests for Covid-19. 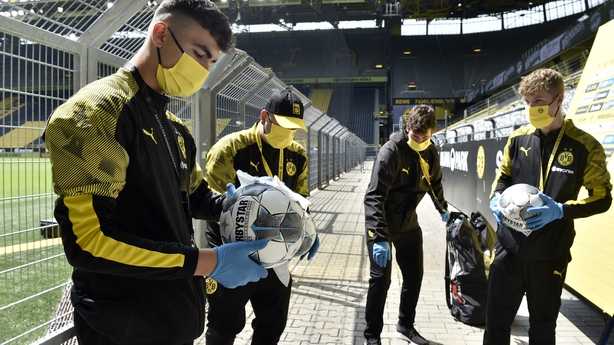 In order to get the political green light to resume, the German Football League (DFL) has tested players and coaches regularly for the virus and teams have been in quarantine for the past week.

Teams arrived at stadiums in several buses in order to meet social distancing requirements inside the vehicles. Once play began, players were banned from shaking hands or embracing to celebrate goals.

Inside the stadiums masks were mandatory for everyone apart from the players.

Teams had to change their routines completely with RB Leipzig having brought in a set of airport stairs to keep substitutes at a distance in the tribunes, some three metres higher up than the bench.

The Bundesliga has allowed five substitutions in total per game to cope with the lack of match practice and the congested fixture schedule.

Although Germany has suffered far fewer deaths from coronavirus than other large European countries, it is still too dangerous for crowds to return. 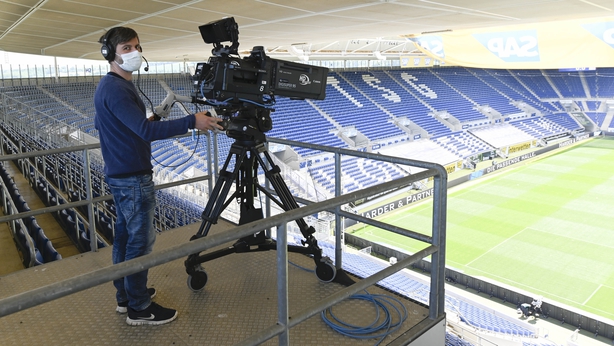 On Sunday, Bayern Munich will resume their quest for an eighth successive Bundesliga title when they play in the capital against Union Berlin.

Bayern were four points clear at the top of the table when the season was suspended in March with Dortmund leading the chasing pack.

The DFL has made no secret of the fact that several clubs are already in a dire financial situation as a result of the lockdown.

If they are able to complete the nine remaining rounds of matches by 30 June, clubs could receive around €300 million in money from television contracts.

Clubs in other parts of Europe, where leagues are weeks away from returning to action, will be watching to see how the weekend's games go.

On Friday, the FAI advised clubs not to return to training nor to open grounds during phase one of the Government Roadmap for Reopening Society and Business, which starts on Monday.

Medical Director of the FAI, Dr Alan Byrne, who has been appointed by Sport Ireland to the Medical Advisory Group, recommended a pilot programme, beginning on 8 June for the four SSE Airtricity League clubs involved in European competition. Players and staff from Dundalk, Shamrock Rovers, Bohemians and Derry City will undergo regular Covid-19 testing from 26 May. 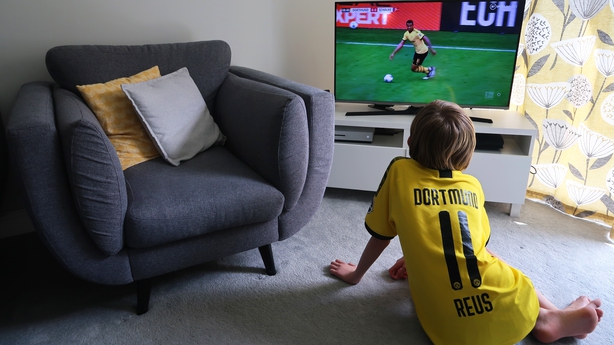 Those four clubs would then participate in a four-team tournament ahead of their European club competition games in late July, early August.

All other SSE Airtricty League squads can return to collective training on the 29 June under Phase Three of the Government Roadmap for reopening Society and Business.

The Bundesliga is expecting millions of extra fans to watch television coverage worldwide, with particular interest in football-mad Brazil and Mexico.

But in Germany, there are concerns that fans will try to approach stadiums to support their teams from afar. Police in Dortmund appealed to fans to stay at home.

"The whole world will be looking at Germany, to see how we get it done," Bayern coach Hansi Flick said.

"If we manage to ensure that the season continues, it will send a signal to all leagues."

Some have already fallen foul of the rules.

Augsburg's new coach Heiko Herrlich has ruled himself out of Saturday's match against Wolfsburg after leaving the team hotel to buy toothpaste.

"I made a mistake," Herrlich said. "I did not live up to my function as a role model for my team and the public."
While Herrlich was criticised, there was sympathy for Union Berlin coach Urs Fischer after he broke quarantine following a family bereavement.

It means he must miss his side's clash with Bayern.

"All our sympathy goes to the Fischer family in this difficult time," said Union president Dirk Zingler.

Ex-Chelsea striker Salomon Kalou, 34, has been suspended by Hertha Berlin for shaking hands with team-mates.

Bavaria's state leader Markus Soeder warned that those who fail to follow the regulations should expect consequences.

"If the health experts have given you these suggestions, if the league itself has worked out concepts at great expense, then you have to abide by these rules," Soeder said Friday.

The coronavirus has claimed over 7,800 lives in Germany and a poll by broadcaster ARD showed 56 percent of the German public are opposed to football's return.

But Aleksander Ceferin, the president of European football's governing body UEFA, said the return to action was a "good sign".

"It's not just about football. People are depressed because of the lockdown and the uncertainty. Football brings a certain normality and positive energy. It makes it easier to be at home, when you can watch sport," he told Bein Sport.