British Prime Minister Boris Johnson has said schools and non-essential shops will remain shut in England until at least June because the coronavirus transmission rate is still too high to significantly ease the lockdown there.

However, Mr Johnson said people who cannot work from home should be "actively encouraged" to return to their jobs from tomorrow and granted unlimited exercise in England from Wednesday.

Mr Johnson outlined "the first sketch of a road map", with a new alert system to determine when aspects of the economy and social lives can be restarted as he tries to limit the damage.

But before his address to the nation this evening, he provoked a row with the leaders of Scotland, Wales and Northern Ireland over his new "stay alert" slogan.

The plan does not apply to the whole of the UK, as the devolved governments in Northern Ireland, Scotland and Wales have power to make their own decisions on a number of matters, including health, and some have already done so.

Boris Johnson says it would be 'madness' to allow a second spike in coronavirus infections. | Read more: https://t.co/008uAj2IEz pic.twitter.com/NzHyCpEsM6

Scottish First Minister Nicola Sturgeon warned the messaging could be "catastrophic", as each of the devolved administrations said they would keep using the stronger "stay home" slogan.

After official figures suggested the UK death toll passed 36,800, Mr Johnson offered "the shape of a plan" to ease the lockdown he imposed on 23 March.

He gave five phases of a "Covid alert level" that will be primarily influenced by the rate of transmission, or R, which he said is between 0.5 and 0.9 "but potentially just below one".

Boris Johnson says the UK is establishing a new Covid alert level to track how the country is dealing with the virus. | Read more: https://t.co/008uAj2IEz pic.twitter.com/lrqB6T9ks6

"No, this is not the time simply to end the lockdown this week," he said. "Instead we are taking the first careful steps to modify our measures."

Mr Johnson said he believes England may be in a position "to begin the phased reopening of shops" and get primary pupils back to school in steps staggered by year groups "at the earliest by 1 June".

He also said the ambition is to get secondary pupils facing exams next year to have "at least some time with their teachers before the holidays".

In the third step, "at the earliest by July", he said that ministers hope to re-open some of the hospitality industry, if the evidence supports the move and distancing can be enforced.

But in an easing of measures, he said the once-daily limit on outdoor exercise in England would end on Wednesday. 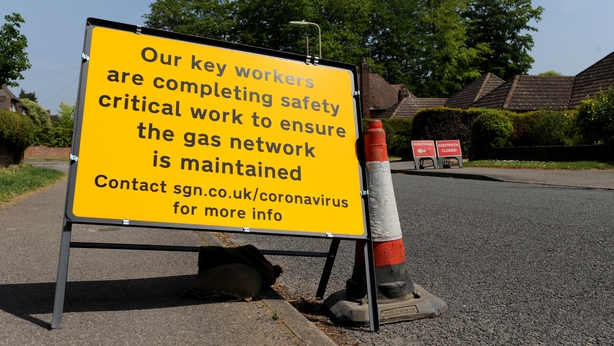 "You can sit in the sun in your local park, you can drive to other destinations, you can even play sports - but only with members of your own household," he said.

But while Ms Sturgeon said she did not want additional businesses to re-open and workers to resume their roles, Mr Johnson gave these steps the go-ahead in England.

Mr Johnson said that, from Monday, "anyone who can't work from home, for instance those in construction and manufacturing, should be actively encouraged to go to work".

Boris Johnson says some workers in the UK should now be encouraged to go work, but should avoid public transport where possible. | Read more: https://t.co/008uAj2IEz pic.twitter.com/mrLuzRUFuO

But workers should avoid public transport "if at all possible" because "we must and will maintain social distancing", he added.

London Mayor Sadiq Khan urged those in the city that the virus has not been defeated yet, and that lockdown has not been lifted.

He encouraged people to stay at home as much as possible.

Londoners: we have not defeated this virus yet. Lockdown has not been lifted so it's imperative that everyone follows the rules and stays at home as much as possible. pic.twitter.com/1pWfzULMug

Mr Johnson also said he was "serving notice that it will soon be the time" to impose quarantine on people flying into the UK "to prevent re-infection from abroad".

He confirmed a new "joint biosecurity centre" would run the alert system, in which he said the UK is ready to begin moving down into level three, with level one meaning the disease is no longer present.

Fines for anyone who breaks social-distancing rules will also be increased, and employers would be sent guidance to make workplaces "Covid secure".

Boris Johnson says 'it will soon be the time' to impose quarantine on people who are coming into the UK from abroad. | Read more: https://t.co/008uAj2IEz pic.twitter.com/QiMKOneeB8

Other than the messaging, there is currently little difference in practise between the four nations, with Ms Sturgeon also ending the once-daily exercise rule from Monday.

Mr Johnson relaxed his slogan to "stay alert, control the virus and save lives" amid concerns that weeks of strong messaging to "stay home" had encouraged too many people to stop working.

He is now telling the public to "stay at home as much as possible", keep two metres apart when going out and "limit contact" with other people.

But the British government's efforts to maintain a unified UK-wide response to the pandemic seemed to be in jeopardy as the devolved administrations rejected his message.

Ms Sturgeon told the Westminster Government not to deploy the "stay alert" message north of the border, warning the "vague and imprecise" slogan could be "catastrophic".