A centuries-old tradition has been kept alive in Co Westmeath, against the backdrop of ongoing Covid-19 restrictions.

The lighting of the Bealtaine Fire at the Hill of Uisneach took place at sunset last night.

The only people in attendance were the Keeper of the Hill, David Clarke and his immediate family.

The public Bealtaine Fire Celebration, due to be attended by up to 5,000 people this Saturday, had been cancelled due to the pandemic.

"This is possibly the oldest festival in Ireland, given that it's been going since Neolithic times. Over the past ten years, it has been revived and has evolved.

The Bealtaine Fire is traditionally seen as marking the arrival of summer in Ireland and a symbol of the re-birth of the land after the long winter months.

Denise Clarke, a radiographer at the Midland Regional Hospital, explained that her family felt that the lighting of the fire should still go ahead.

"We’re lighting the fire this year as a symbol of hope and to show that In these trying times there is still light going forwards," she said.

"I come up here most days after work and it’s a really special place. I wouldn’t want to miss this."

Uisneach was a very important sacred site to the ancient Irish, as it is at the exact trigonometric centre of Ireland.

It was the seat of the High King and is also said to be the burial site of goddess Eriú who gave her name to the island. 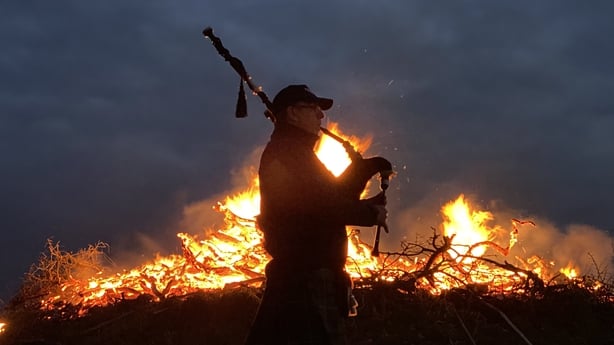 Last night, other fires were lit at a number of other heritage sites around the country.

Bonfires could also be seen burning on some of the hills near Uisneach.

"It’s very symbolic. This is bringing the darkness into light.