An ambitious "cloud brightening" experiment has been carried out over Australia's Great Barrier Reef in an early-stage trial that scientists hope could become a futuristic way to protect coral from global warming.

In an attempt to cool waters around the reef by making clouds reflect more sunlight, researchers said they used a boat-mounted fan similar to a snow cannon to shoot salt crystals into the air.

"All the research is theoretical... so this an absolute world first to go out and actually try and take seawater and turn it into these cloud condensation nuclei," he said.

Mr Harrison stressed that despite the success of the experiment, at least four years of further research would be needed to prove the theory.

Warmer seas caused by climate change have damaged the health of the Great Barrier Reef, the world's largest coral system.

The experiment was carried out by the university and the Sydney Institute of Marine Science late last month, just before a comprehensive scientific survey found that the reef had suffered its most widespread coral bleaching on record. 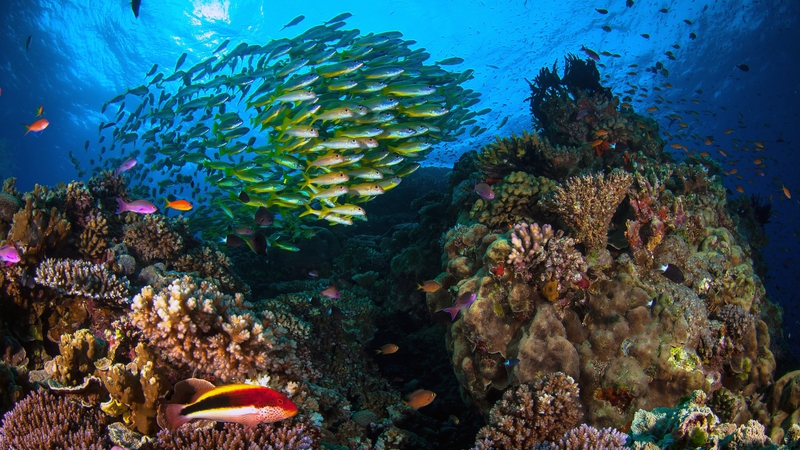 Bleaching occurs when healthy corals become stressed by changes in ocean temperatures - causing them to expel algae, which drains them of their vibrant colours.

It was the third mass bleaching event in the past five years, raising fears that much of the reef's coral could be permanently damaged.

To have a significant impact on the reef, a full-scale experiment would need to be 10 times larger, involving the use of several big barge-mounted turbines, Harrison said.

But, he added, "If it works as well as we hope then maybe we could reduce the bleaching stress by about 70%... potentially nearly all of the mortality."

He also said the effectiveness of the cloud-brightening technique would drop significantly as the ocean warms further.

That means the process would be similar to putting the reef on life-support while the underlying challenge of climate change was addressed.

"If we keep going on business-as-usual-type emission scenarios, then at most this technology can just buy a couple of extra decades before we see the complete loss of the reef," he warned.