Official figures for Europe suggest unprecedented measures to restrict people's movements are working and that the peak may have hit on the continent.

However, Italy and Spain continue to bear the brunt of a pandemic that has kept millions of citizens confined to their homes, closed schools and businesses and overwhelmed healthcare systems.

Spain, which is under a near-total lockdown, has recorded a second successive daily fall in coronavirus-related deaths with 809 fatalities.

The total number of deaths in the country now stands at 11,744, second only to Italy.

Spain's prime minister announced an extension of the country's lockdown to combat the spread of the virus, saying the measures are "bearing fruit" as the number of deaths fell.

A nationwide 15-day state of emergency was first announced on 14 March barring people from leaving home except for essential outings such as buying food or seeking medical care.

It was to end on 11 April after being extended by two weeks.

"The cabinet on Tuesday will again ask for authorisation from parliament to extend for a second time the state of alert until Saturday 25 April at midnight," Prime Minister Pedro Sanchez said in a televised speech.

The extra weeks are "the time that our health system needs to recover," he said.

Hospitals, in particular the intensive care units, have been overwhelmed by an influx of coronavirus patients.

Meanwhile, Italy reported late yesterday that the daily rise of officially registered infections dropped to a new low of just 4%, while the number of people who had fully recovered was rising.

"Our hospitals are starting to breathe."

On Saturday, Italy also saw its first drop in patients receiving intensive care for the coronavirus.

"This is very important news," civil protection service chief Angelo Borrelli told reporters of the drop from 4,068 to 3,994 intensive care patients over the past 24 hours. 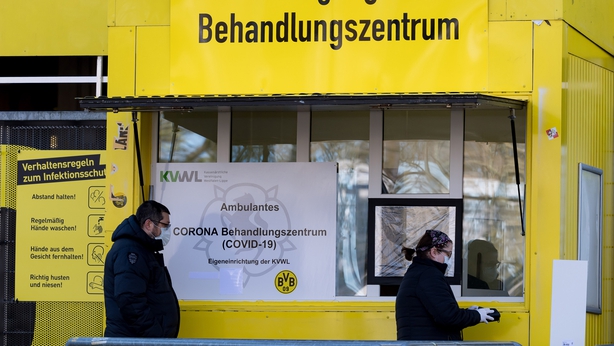 European governments have nevertheless warned citizens not to expect a loosening of the restrictions anytime soon.

In Germany, where the death toll rose again today, Chancellor Angela Merkel said figures showing the virus's spread was slowing "give us a little bit of hope".

"But it is definitely much too early to see a clear trend in that, and it is certainly too early to think in any way about relaxing the strict rules we have given ourselves," she said.

German authorities joined the US and other countries in encouraging citizens to wear self-made masks in public, prompting a flurry of online tutorials and debate about how to maximise protection.

In France, 160,000 police officers and gendarmes fanned out nationwide to ensure people were heeding the confinement rules despite the start of the Easter holidays, when French families traditionally head to the beach, countryside or mountains.

Interior Minister Christophe Castaner said security forces would be carrying out checks "day and night" at stations, on motorways and at tourist destinations.