The chief medical officers in the Republic of Ireland and Northern Ireland will sign a Memorandum of Understanding formalising co-ordination and cooperation between the Irish Government and the Northern Ireland Executive this week.

It comes as Tánaiste Simon Coveney held a teleconference with the Northern Ireland Secretary of State Brandon Lewis and Stormont's leaders to discuss ongoing cooperation to deal with the coronavirus.

She added: "Co-operation and common action across our island is vital at this time.

"Protection of the lives and welfare of everyone on the island is paramount, and no effort will be spared in that objective.

"Working closely together, the two chief medical officers will sign a Memorandum of Understanding formalising co-ordination and cooperation between the Irish Government and the Executive this week."

Yesterday, Arlene Foster and Ms O'Neill acknowledged they are at odds on certain coronavirus issues, but insisted they are united on the main goal of saving lives.

They made the comments following reports of growing tension around the executive table over issues such as testing numbers, personal protection equipment stocks and the closure of non-essential businesses.

Earlier this month, the two main executive parties, the DUP and Sinn Féin, were also divided on when schools should close.

Meanwhile, a professor of Public Health University of Bristol has said the island of Ireland needs to work as one unit in the fight against coronavirus.

Gabriel Scally warned that we risk squandering the geographical advantage of living on an island, because of different health policies being adopted on both sides of the border.

Prof Scally, who led the inquiry in the CervicalCheck controversy and was born and grew up in Belfast, said it would be nonsense to have restrictions placed on people coming off planes in Dublin, if similar restrictions are not imposed in Northern Ireland.

Speaking on RTÉ's Today with Sean O'Rourke, he said it was regrettable that Northern Ireland was continuing to follow the advice from Whitehall.

He said he believed that the advice from London was "seriously flawed" but added that health in Northern Ireland is a devolved power and they could choose to follow their own path.

He said that there was a hope and a chance that we can stop the virus properly, but it had to be on the basis of stopping the importation of new cases.

He called for a harmonisation of measures on the island of Ireland and cited the example of self-isolation, which in Northern Ireland is seven days but in the Republic it is for 14 days.

Speaking on RTÉ's Claire Byrne Live last night, Mr Coveney said the advice is the supply lines need to be kept open and Irish citizens need to be allowed to come home.

He said he does not think anyone wants to close the border with Northern Ireland and the Government has no intention of doing that.

In the coming days, Northern Ireland will get access to some of the Personal Protection Equipment that was sourced in China and transported back to Dublin by Aer Lingus.

There may be further north-south contacts involving the Taoiseach, as well as the Tánaiste, later this week. 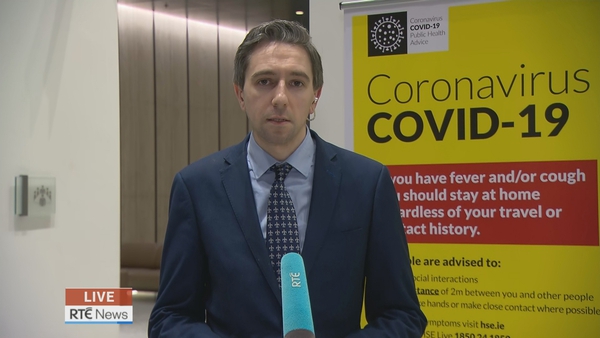