Spain's armed forces have asked NATO for humanitarian assistance to fight the novel coronavirus as the national death toll touched 2,700 and infections soared towards 40,000.

With the pandemic spreading across the world, Spain has been one of the worst-hit countries, logging the third highest number of deaths with the latest toll standing at 2,696 after another 514 people died over the past 24 hours.

Despite an unprecedented lockdown imposed on 14 March, both deaths and infections have continued to mount, with the Spanish army called in to join efforts to curb its spread.

With authorities stepping up testing, the number of people diagnosed with Covid-19 rose by nearly 20% to 39,673, the health ministry said.

Health authorities said it would soon become clear whether the lockdown was having the desired effect.

"This is a very hard week because we're in the first stages of overcoming the virus, a phase in which we are approaching the peak of the epidemic," Health Minister Salvador Illa told a televised news conference.

Like many other countries, Spain has been struggling with a lack of medical supplies for testing, treatment and the protection of frontline workers.

In a statement, NATO said Spain's military had asked for "international assistance", seeking medical supplies to help curb the spread of the virus both in the military and in the civilian population.

The government has said it is working on plans to produce in Spain the equipment needed to battle coronavirus.

"We are starting to talk about a war industry, a war economy and it is essential," Industry Minister Maria Reyes Maroto told a news conference.

With the numbers still spiralling, the government of Prime Minister Pedro Sanchez has sought parliamentary approval to extend the state of emergency for an extra two weeks, until 11 April - the day before Easter - in a bid to slow the spread of the virus.

"We are aware of just how hard it is to prolong this situation, but it is absolutely imperative that we keep fighting the virus in order to win this battle," government spokeswoman Maria Jesus Montero told the news conference.

Spain, she said, was in "the decisive phase in responding to the crisis, a crisis which was testing Spanish society in the most unimaginable way".

The surge in numbers has brought the medical system to the brink of collapse, with some 5,400 healthcare workers testing positive for the virus, around 12% of the total.

The Madrid region has suffered the brunt of the epidemic with 12,352 infections - just under a third of the total - and 1,535 deaths, or 57% of the national figure.

The army has been charged with helping to disinfect retirement homes in Spain, one of the countries worst hit by the pandemic.

Dozens of deaths from Covid-19 have been recorded at facilities across the country.

"We are going to be strict and inflexible when dealing with the way old people are treated in these residences," Defence Minister Margarita Robles said in an interview with television channel Telecinco.

"The army, during certain visits, found some old people completely abandoned, sometimes even dead in their beds," she added.

An investigation has been launched, the general prosecutor announced.

Meanwhile, the ice rink at the Palacio de Hielo, or Ice Palace, shopping centre in Madrid has been turned into a temporary morgue to deal with a surge in deaths in the capital, according to a spokeswoman for Madrid city hall. 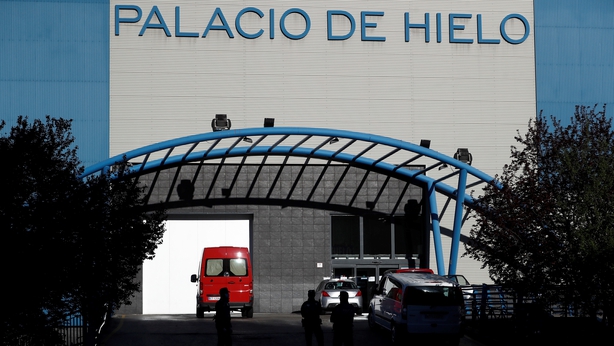 Earlier, the city hall said the city's 14 public cemeteries would stop accepting more bodies because staff there did not have adequate protective gear.

The improvised morgue would start to be used "in the coming hours", the regional government of Madrid said.

"This is a temporary and exceptional measure which aims to mitigate the pain of the family members of the victims and the situation hospitals in Madrid are facing."

A nearby conference centre has been converted into a field hospital for coronavirus patients that will have a total of 5,500 beds.

The elderly are especially vulnerable in the global pandemic and officials around the world are increasingly calling for extreme measures to safeguard them.

Retirement homes are "an absolute priority for the government", Minister for Health Salvador Illa told a press conference.

"We will exercise the most intensive monitoring of these centres."

Under coronavirus protocols, health workers have been instructed to leave bodies in place in suspected Covid-19 deaths until the arrival of a doctor. But given the upsurge in deaths the delay can be lengthy.