As countries across the world continue with their efforts to contain the spread of Covid-19, Italy recorded its highest single day death toll of 168.

It comes as EU leaders held a conference call aimed at coordinating their response to the virus and airlines announced the cancellation of flights to and from the worst affected areas.

Meanwhile in China, where the virus originated, 70% of those who were infected are reported to have been cured of their illness.

Here are the latest developments in the coronavirus crisis:

Since the novel coronavirus first emerged in late December 2019, more than 117,339 cases have been recorded in 107 countries and territories, killing 4,251 people, according to an AFP tally compiled at around 1700 GMT on Tuesday based on official sources.

More than 15,000 cases have been counted in Europe.

In China, more than 70% of those who have been infected have been cured since the epidemic broke out.

Italy tells its 60 million people to "stay at home" in a government decree which allows travel only for the most urgent work or health reasons.

The football league is suspended until 3 April. 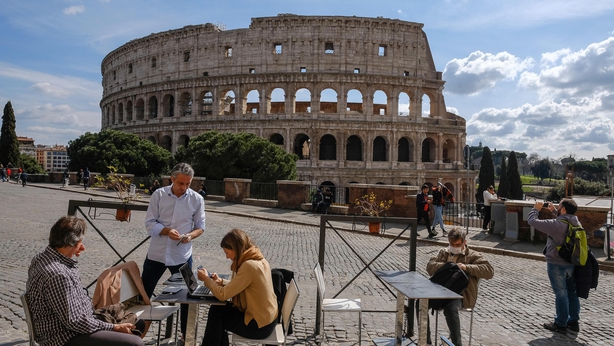 Spain says it is suspending all air traffic with Italy for two weeks. Several airlines also decide to stop air services there including Air France and Ryanair.

Austria bans entry for people from Italy, unless they have a doctor's certificate, while Slovenia also closes its border with the country.

Greece announces a two-week shutdown of schools, creches and universities.

The Czech Republic also says it will close all schools, as do certain regions of Spain, including Madrid.

The central Chinese province of Hubei, the epicentre of the coronavirus, eases travel restrictions on its inhabitants.

China's leader Xi Jinping, on a visit to the provincial capital Wuhan, says the epidemic has been "basically curbed" there.

Five members of the US Congress, including at least two Republicans who have mixed with President Donald Trump, are in voluntary confinement after being exposed to the coronavirus. Trump himself has not been tested.

In France, where five parliamentarians have been infected, Culture Minister Franck Riester contracts the coronavirus and works from home.

In Spain one of the leaders of the far right party Vox, Javier Ortega-Smith is also ill.

Algeria calls off all sports, cultural, and political  gatherings.

Romania and Slovenia respectively ban gatherings of more than 1,000 and 100 people.

In Ireland, St Patrick's Day parades scheduled for 17 March across the country are cancelled, as is the parade in the US city of Boston.

All matches in the world judo championships are cancelled until 30 April.

Barcelona's Champions League round of 16 return match against Napoli on 18 March will be played behind closed doors.

The stadiums will also be empty during forthcoming league matches in France, Portugal and Spain, and several matches of the German Bundesliga.

As they will be for the Euro 2020 warm-up match between Germany and Italy in Nuremberg on 31 March 31.

Israel imposes a two-week quarantine on all arrivals. The measure, already in force for several European countries, has so far spared countries such as the United States.