Former French prime minister Francois Fillon and his wife Penelope have appeared in court over claims they embezzled over €1m in an alleged fake-jobs fraud.

The couple made no statement as they entered the Paris courthouse under police escort.

As they entered the court dozens of lawyers were staging a protest outside over plans to merge their pension scheme into a single system.

The trial of the former presidential hopeful and his wife had been due to start today but the court granted their request to delay the opening until Wednesday in solidarity with the lawyers' strike.

Investigators suspect that Mr Fillon, 65, hired his Welsh-born wife Penelope as his parliamentary assistant between 1998 and 2013, without having her do any actual work.

The allegations that Ms Fillon, who is also charged in the case, was paid up to €10,000 a month for little to no work emerged in January 2017 and quickly snowballed into a scandal that cost Mr Fillon his shot at the presidency just a few months later.

They also contributed to the implosion of his rightwing Republicans party, pushing many voters toward Emmanuel Macron's centrist party.

Mr Fillon has denied the allegations and insisted that his wife, who is charged with complicity in misuse of public funds, did real work for him in his rural constituency of Sarthe.

But investigators say they have found little documentary evidence of her efforts. 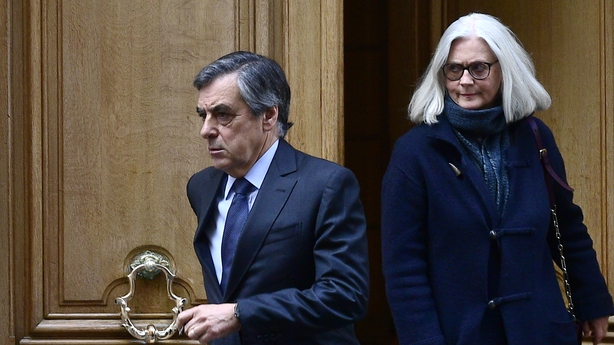 They have also seized on a 2016 newspaper interview in which Ms Fillon declares that "until now, I have never got involved in my husband's political life"  echoing a statement she made to the Sunday Telegraph in 2007.

The Fillons and a third defendant, Marc Joulaud, who stood in for Mr Fillon in parliament when he was a cabinet minister and also hired Ms Fillon as an assistant, face up to ten years in prison.

If found guilty, they may also face a hefty bill - France's National Assembly has joined the case as a civil party, and said it could seek over €1m in compensation.

Mr Fillon has already ruled out any return to politics, saying in a television interview last month that his priority is to defend his family's honour.

The allegations were first published in January 2017 by the Canard Enchaine, a satirical and investigative weekly newspaper, a few weeks after Mr Fillon won his party's primary contest.

The paper detailed the amounts paid to Ms Fillon, as well as thousands of euro paid to two of his children as parliamentary assistants when he was senator.

In addition to the parliamentary jobs, Mr Fillon has been charged over payments to Ms Fillon from a magazine owned by a billionaire friend of his, Marc Ladreit de Lacharriere.

Mr Ladreit de Lacharriere avoided a trial by pleading guilty in December 2018 to paying her €135,000 for a job that was largely fake.

He was given an eight-month suspended sentence and ordered to pay €375,000 in fines.

"Penelopegate" was all the more damaging for the French right given that Mr Fillon had campaigned for president as a man of integrity and financial rectitude, boasting of his scandal-free past over his former boss and rival Nicolas Sarkozy.

"There have been a lot of scandals in French political life, but in general they had to do with party financing," political historian Jean Garrigues told AFP, citing as an example the 2011 corruption conviction of former president Jacques Chirac.

The Fillon affair - like the tax fraud scandal that brought down Socialist budget minister Jerome Cahuzac in 2013 - deeply shocked the French because it allegedly exposed a grubbier instinct, that of using elected office for personal enrichment.

After his election, Mr Macron moved to prohibit politicians from employing their family members and also scrapped cash handouts for politicians to bestow on projects and NGOs of their choice.