The father of a Donegal boy who wrote to Jürgen Klopp asking him to stop Liverpool winning matches has said the Premier League manager is "one in a million" after he replied to the youngster.

Daragh Curley, who is a ten-year-old Manchester United fan, used the opportunity of a school writing project to pen the letter to the manager of his rival club.

Unbeaten Liverpool are currently 22 points clear at the top of the English Premier League table and have won 25 of their 26 league games so far this season.

In the letter, Daragh told Klopp that Liverpool are winning too many games and he asked the German to make them lose the next time they play.

"If you win nine more games, then you have the best unbeaten run in English football. Being a United fan that is very sad," he wrote.

"So the next time Liverpool play, please make them lose. You should just let the other team score.

"I hope I have convinced you to not win the league or any other match ever again."

Speaking to RTÉ's Drivetime yesterday, Daragh said that in the letter Klopp said "unfortunately, on this occasion I cannot grant your request, not through choice anyway".

He went on to say that Liverpool have lost games in the past and will lose games in the future "because that is football."

Klopp added that Manchester United are lucky to have Daragh as a fan. 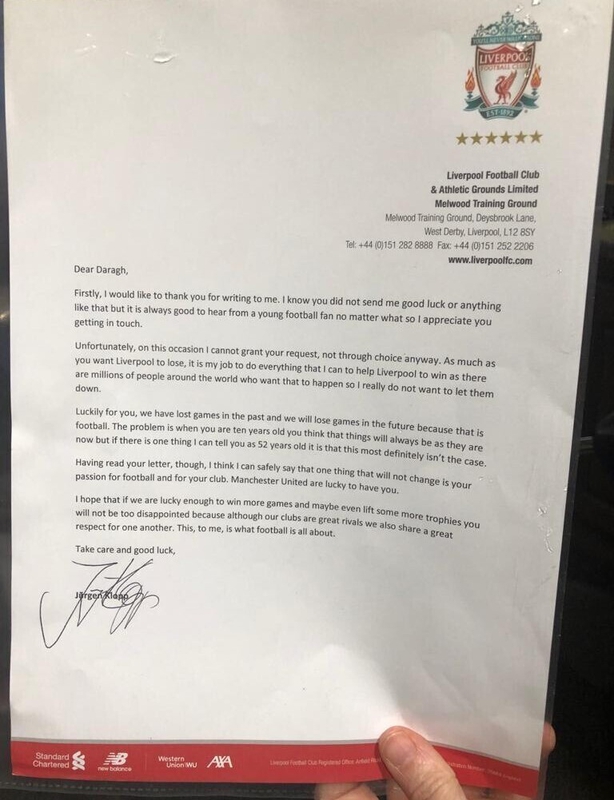 Daragh's father, Gordon Curley, explained that most of the kids in the class decided to write to Donald Trump and Boris Johnson.

"Daragh decided to write a letter of complaint to Mr Klopp," he said.

"My wife was in the post office two weeks later with a registered letter addressed to Daragh. We thought 'who would be writing to Daragh from the UK' and he jumped up and shouted it's from Klopp!"

Mr Curley said: "My opinion of Klopp was always one of admiration and respect. He fights like hell for his team. After reading the letter it only cements my opinion of him.

He added: "Daragh was over the moon. He was delighted. The great thing about the letter was the sportsmanship. It was wonderful and a great gift. My son hasn't stopped smiling." 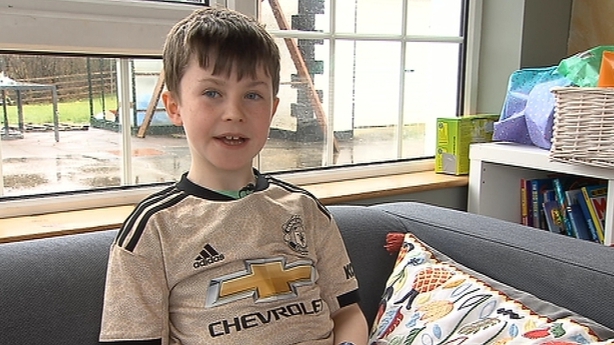 Klopp said today that he was so charmed by the sheer cheek of the letter that he sent a personal reply and described it as a "smart" move.

"It was just nice," Klopp told the weekly pre-match news conference. "It was nice, it was cheeky. It was everything together.

"Cheeky, 10-years-old, which I think is a nice age where you should start being cheeky and it was smart as well. It was just that I thought it's a good idea. Try it. Why not?"

Klopp's juggernaut are yet to lose a league game this season, winning 25 and drawing one of their 26 so far, which explains why Daragh felt the need to take matters into his own hands.

"I have no problem with supporters of other clubs," Klopp added. "I think, hope and know that it's a free world so we can choose our club.

"I don't think everybody has to be a Liverpool fan. I like working for Liverpool and I like the rivalry we have, but I love it even more if we can keep that on the pitch so apart from that they can be happy and we can be happy.

"And he looked like it in the picture I saw later, so good."