Chinese authorities are due to suspend flights and trains out of the city which is at the centre of a deadly virus outbreak.

Residents in the central city of Wuhan, which has a population of 11 million people, are also advised that they should not leave without a special reason, according to state broadcaster CCTV.

The move, effective tomorrow at 10am local time, is meant to "resolutely contain the momentum of the epidemic spreading" and protect lives, the central city's special command centre against the virus said.

The death toll from the flu-like coronavirus has risen to 17 with over 540 confirmed cases, as China warns the virus, which has spread to other countries, could mutate.

The warning came as authorities scrambled to contain the disease during the Lunar New Year travel season.

The virus is believed to have emerged from an animal market in Wuhan, and is suspected by officials to originate from illegally traded wildlife. Cases have been detected as far away as the United States, Taiwan, Thailand, Japan and South Korea.

The World Health Organization (WHO) has been meeting in a high-tech room at its Geneva headquarters to decide whether the outbreak is a global health emergency. It will decide on Thursday whether to declare a global emergency over the outbreak of the virus.

The new coronavirus has caused alarm for its similarity to SARS (Severe Acute Respiratory Syndrome), which killed nearly 650 people across mainland China and Hong Kong in 2002-2003.

The illness is transmitted via the respiratory tract and there "is the possibility of viral mutation and further spread of the disease", National Health Commission vice minister Li Bin said at a news conference in Beijing.

The Chinese government has classified the outbreak in the same category as the SARS epidemic, meaning compulsory isolation for those diagnosed with the illness and the potential to implement quarantine measures on travel.

A prominent expert from China's National Health Commission confirmed this week that the virus can be passed between people.

Countries have been intensifying efforts to stop the spread of the pathogen, known by its technical name 2019 Novel Coronavirus (2019-nCoV).

The Department of Foreign Affairs has advised travellers to exercise a high degree of caution if travelling to China.

European airports from London to Moscow have stepped up checks flights from Wuhan.

In a statement, the European Centre for Disease and Prevention and Control said: "The upcoming Chinese New Year celebrations at the end of January will cause an increased travel volume to/from China and within China, hence increasing the likelihood of arrival in the EU of possible cases.

"There is considerable uncertainty about the mortality and morbidity of this disease, and more epidemiological data is urgently needed to get a better understanding of this virus."

It put the likelihood of the virus spreading to Europe as "moderate". 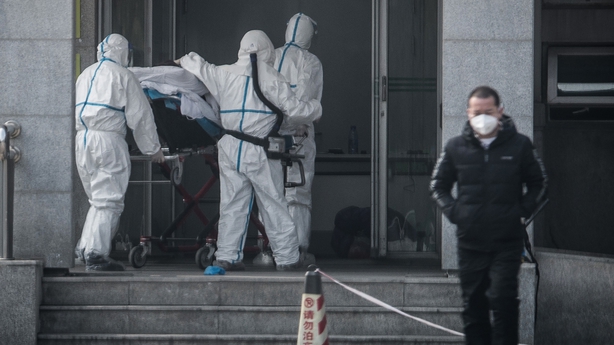 Coronaviruses are a family of viruses named because of the crown-like spikes on their surfaces that cause respiratory illnesses ranging from the common cold to the deadly SARS.

The Chinese-ruled gambling hub of Macau has confirmed its first case of pneumonia linked to the outbreak and tightened temperature screening measures in casinos and around the city.

The Macau case involves a 52-year-old Wuhan businesswoman who reported to hospital yesterday, said Macau Secretary for Social Affairs and Culture Ao Leong Lu, who vice chairs a committee set up to respond to the virus.

The woman took a high-speed train to the Chinese city of Zhuhai on 19 January, then a shuttle bus to Macau.

She had dinner with two friends, then went to the hotel and spent a long time in casinos. She was in a stable condition in an isolation ward. Her two friends were also being monitored and were in isolation.

Meanwhile, US President Donald Trump said the United States has a plan in place to contain the outbreak.

Speaking on the sidelines of the World Economic Forum annual meeting in Davos, Switzerland, Mr Trump said: "We do have a plan and we think it is going to be handled very well. We've already handled it very well. The CDC (Centers for Disease Control) is terrific. Very professional."