A new survey has found that more than half of small and medium-sized Irish enterprises are experiencing some or significant impact as a result of Brexit.

The research also found that a third of SMEs have postponed a business decision or investment because of the uncertainty around the UK's departure from the EU, up from a fifth earlier in the year.

The poll, carried out by Behaviour and Attitudes on behalf of the Department for Business, Enterprise and Innovation in September and October among over 1,000 SMEs, discovered that just a third have taken some action on Brexit, rising to 42% among those exporting to the UK.

Three quarters of small businesses have Brexit on the agenda of their top management, the research found.

Three out of every five has gone so far as to seek information by going to a workshop, applying for supports or reading information, up from 40% in March.

A fifth of those importing or exporting to Britain told the researchers that they plan to use a customs agent, with more than half of those already acting upon that plan.

Another 21% said they will use internal resources to carry out this work, with 8% already having trained someone to do it. 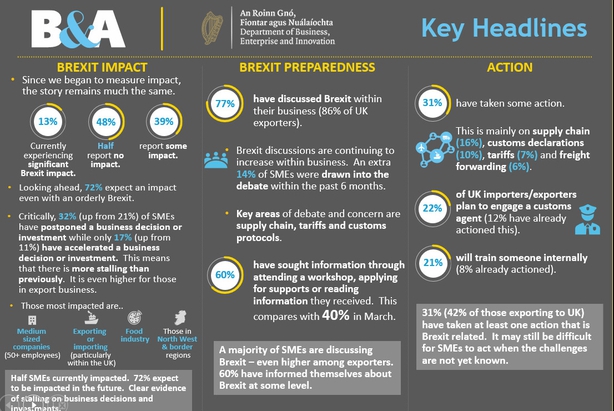 Underlining the wide implications of Brexit, no matter what form it takes, three out of every four respondents said they expect an impact from it, even if it is orderly.

"The threat of a crash-out may have subsided for now but the reality is that any kind of Brexit is going to hurt Irish enterprise," she said.

"It's important also for everybody to remember that Brexit doesn't end on the 31 January.

"Yes - if the Withdrawal agreement is passed, we will have achieved our core objectives of ensuring no hard border on the island of Ireland, protecting the Good Friday Agreement, and safeguarding the Single Market as well as our place in it."

"However, we are now heading into a long and complex process with the negotiations on the future relationship between the EU and the UK."

Her department also reiterated that it has a number of supports available to help firms prepare for Brexit, including loan schemes to help with the burden of finance and working capital.